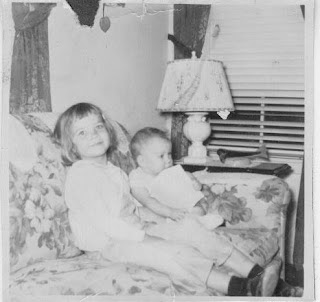 
Yesterday I was reminded, and not in a good way, how much the world has changed. What happened yesterday? Nothing much -- I had to locate a pair of white gloves. I used to have white gloves but I don't have them anymore -- I guess they were discarded during one of several moves. We didn't wear them anymore -- why keep them. After phoning several department stores, craft stores and bridal shops I accepted the fact that they were not to be found locally. So, I went online. I found them, placed my online order, paid an unbelievable price for speedy shipping and I was done. However, my mind raced back in time and I could visualize where I could go to get white gloves -- the accessory department at Joske's where my aunt worked. Or, Winn's -- the neighborhood five and dime. But, finding white gloves and handkerchiefs and head scarves wasn't a difficult thing. When did we quit needing these things? When life became all jeans and trainers and t-shirts? Everybody says that is an improvement -- no more hose, heels, the trappings of femininity gone or at least changed. Not only was it a frustrating quest, finding these white gloves, it was also sad.

As I look at the photo above I am taken back to a much different time but not ALL that long ago. This photo is of myself (the baby) and my cousin jlshall. The setting, her house, was typical of the time -- postwar housing, slipcovered furniture, venetian blinds of the metal variety and REAL ivy plants. My house looked the same way. Our way of life was different. Cars weren't as plentiful -- we went downtown on the bus every Saturday (sometimes sporting the much coveted white gloves). We would eat at Casa Rio, a big treat which never really ended well for either of us. We shopped at major department stores rather than strip centers. We didn't have to commute to see our relatives -- if either of us wanted to run away from home all we had to do was cross the street to our aunts houses. If we needed milk, we walked around the corner to the convenience store that was owned/operated by the same family for all my life. It was much slower, absolutely primitive compared to today where my daughter has almost a two hour commute to and from her job, where you can't find white gloves and if you want a plain old headscarf you best take yourself to your local antique mall.

Are we better off now? Considering all the media attention directed toward the "greening" of ourselves and our environment I would have to say no. Yes, we live in lovely new homes with new and improved materials, we have nice cars and many modern conveniences from robotic vacuum cleaners to steam washers and advanced climate control, our wood floors are covered in carpet to keep our feet warm. Many new, innovative things -- many of which have proven to be grossly unhealthy.

However, there are days when I long for the times when our a/c meant open windows and a screen door, our clothes were line dried, our normal transportation was public and we walked to school. We played outside in our lawn chair house under the gardenia bush and we played with paper dolls cut from coloring books. Our video games were a deck of cards that we learned to "fish" and "battle" and get really wild with a game of "21". Our music was on records, scratched that they were, and our television view was limited to two channels -- well, until we got three.

We weren't without the normal problems but they seemed to be dealt with more effectively -- nobody committed suicide, turned to drugs or required counseling. We had each other to help us cope.

It was slower then, and some days a little boring, but it was fun when we would all sit outside in the evening and look at the stars as we laid on our backs on blankets. Yes, we could actually see the stars -- they weren't obscured by city lights.

A quick look at the photo reveals more than the home furnishing trends of the time. It shows two children untouched by stress, healthy in a cleaner environment and secure in the family setting that is still, today, so important.

Are the two children in the photo still like that? Well, sort of. Older, wiser, survivors of the 60's, but I think we still revere those times and look upon them as the "gold standard" of generations -- the best of times, the worst of times so to speak. I can only speak for myself but I wouldn't mind going back to those times for a day -- if I could get by without the a/c and if I could take my computer and my new white gloves.
at April 16, 2008 2 comments: