In re-reading my post of earlier, there is a typo that I can't seem to correct because google won't let me! Trust me that I do know the difference between there and their and they're -- I just don't type so well anymore. So, lest I offend anyone (dear daughter comes to mind) I will rectify the error as soon as Google lets me. I hope I don't have to go back to Wordpress.
at December 31, 2009 No comments:

Email ThisBlogThis!Share to TwitterShare to FacebookShare to Pinterest
Ushering out the Old and Ringing in the New!

I have read on several blogs, FB comments and heard in queues that people are glad to see 2009 go -- don't let the door hit you in the rear as you exit! I don't feel that way about 2009. Of course, it could be that I didn't have a bad year. I didn't have a monumental year, either. I just had a year. It was quiet -- thank God -- and uneventful -- again, thank God. As I age I recognize the value and blessing of "uneventful" or "boring". There is nothing quite as comforting as "boring".

Of course, there are things I wish I had accomplished like losing weight, exercising more, reading more books, being a nicer person but there are no huge regrets. I was blessed by becoming better acquainted with my DOK sisters and actually seeing the power of prayer through the diligence and faith of these women. I was blessed by my increased involvement in DAR which has strengthened by belief that we do, in fact, live in the greatest country in the world and that we should not take it for granted but be staunch in our values and standards for which our flag flies and our troops defend.

It goes without saying that watching the g-kiddos grow is a blessing and a privilege for which there are no words. Learning, during the latter part of the year, that there is to be a new addition to the family in 2010 has brought joy, excitement and blessing to this family and we can hardly wait to see Bean Wilcox in the summer. What greater purpose can their be for the new year than to gather around these children and watch them grow and flourish.

As New Year's Eve approaches AW and I are settling in for a home cooked meal as the rain falls. There are no parties or get-togethers planned -- we abandoned all that years ago. It is a joy for us to kick off the shoes and watch a movie or listen to music. 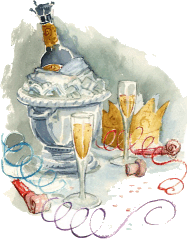 I am sure by midnight we will be past the point of no return.

I am sure that Rollie, being the teenage cat that he is, has other plans, however.

I sincerely hope, however, that he lays off trying to eat ribbon. It doesn't work well for him and isn't a pretty sight.

So, as the end of 2009 approaches I just want to say to everyone 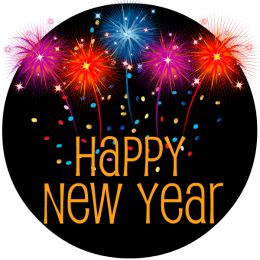 whatever that means to you. As for me, I am hoping for another "boring" year
at December 31, 2009 No comments: