With the cedar pollen blowing up my nose and me putting everything off until the last minute, I have been pretty bah - humbuggy.  Until today.  For some reason it seemed like Christmas today.  As I walked through Dillards and looked at all the pretty holiday tableware I was suddenly transported back to my childhood.  The store was quite decorated, it was full of people, the candy area reminded me of Joske's for some reason and all of a sudden, my blahs were gone.  It was also 80 degrees, almost, which is more like the Christmas's I grew up with in South Texas.


I just about got everything finished so the hubs and I went shopping for ourselves tonight. Long gone are the days of sneaking around, wrapping presents and hiding things -- we now go for practical things and we don't see much reason to waste all that wrapping paper.  So, today was our day.

The hubs did his shopping at Woodcraft where he bought a couple of hand tools for woodworking.  I had ordered him a pocket knife that he wanted but it is on back order so he won't be getting it for a little while but that was ok.

My shopping was done at William--Sonoma where I bagged these-- 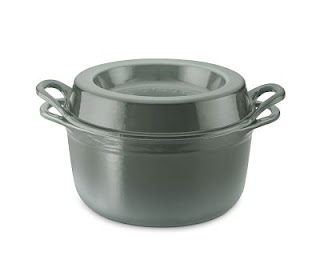 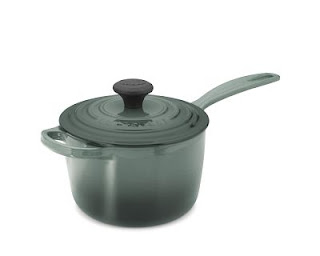 The color, Ocean, is really pretty and I just love Le Creuset so I am happy!

So, Merry Christmas, everybody and I am going to go  cook something!
at December 20, 2010 2 comments:

It was Thirty Years Ago Today 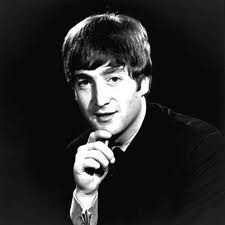 I am a baby boomer.  I "grew up" during the decade between 1960 and 1970.  Even though my parents say that the 1940's were the best time to live, I know that the 60's were, without a doubt,  the most exciting time  to be a younger person albeit not the safest.

It was 1963 or 64 when the Beatles took the US by storm.  I was taking ballroom dance lessons at Bette and Glen Dance Studio when "I Want to Hold Your Hand" was released.  I remember the guy who had my interest at the moment telling me it was the "dirtiest" song he had ever heard.  Ha! We were just coming out of the 50"s -- no songs were dirty.  Since this was well before the advent of cable , satellite or the internet we had to rely on Ed Sullivan and movie and teen magazines to keep us up on what was happening on the entertainment scene.  We did ok, though, with our precursors to the ipod (called a transistor radio) glued to our ears we would spend hours at the magazine stand at the grocery store reading every article on whoever was catching our eye at the moment only taking out a bit of time to flirt with the package boys.

I wasn't a Beatlemaniac.  I didn't have a favorite although I guess I gravitated toward Paul -- "the cute one".  It was really interesting, however, to be able to see and hear young people from another country doing the same things that we did here.  I bought the records, saved the magazines and got all caught up in the British Invasion (especially the clothes) but I never lost interest in our homegrown groups.


Time moved on, The Beatles broke up, I grew up and that was that.  My interest was piqued again in 1969 when it was reported that Paul McCartney had died in a car accident three years prior and was replaced with a double.  This news was only of passing interest -- however, I now believe the story to be true.  In any event, not much thought was given to the Fab Four or any of my other favorite entertainers until 1977 when Elvis Presley passed away at the age of 42 -- absolutely ancient to my 27 years.  I cried and tried to explain to my two year old what was wrong.  He didn't get it. 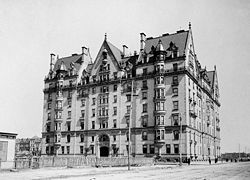 He didn't get it in 1980 when I cried again on December 8 when a special news report broke into regularly scheduled programming to announce the murder of John Lennon at his home at the Dakota Apartments in NYC.  Suddenly the years melted away and I was 13 again listening to the "dirtiest song" ever.  This couldn't be -- not only couldn't John be 40 years old he certainly couldn't be dead -- especially at the hand of another.  The next day or so I sent my dear, long suffering hubby out in an ice storm to buy a copy of "Double Fantasy" -- I hadn't bought an album in forever -- and I was quite taken aback.  It was great - - well most of it anyway - pick up a copy and you will know what I mean.  I hadn't seen a photo of Lennon in a while and was surprised that he had aged nicely 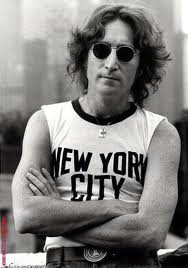 and he still looked like himself, unlike Paul. There was lots of talk about him turning into a house husband and being a has-been but the album proved that as he aged he mellowed but he was still capable of producing fantastic music but, sadly, there would be no more.

Lately I have had a renewed interest in the Beatles and have done some reading and movie watching -- "A Hard Day's Night" to be exact, which I had never seen before.  I have watched some documentaries leading up to today and see this group in a whole new light.  Of course, I guess my aging has skewed my viewpoint as well.  They were a great little group that possessed a lot of talent and I am proud that they were part of my generation.

Rest in peace, John and yes, we are all still trying to imagine.
at December 08, 2010 No comments:

Email ThisBlogThis!Share to TwitterShare to FacebookShare to Pinterest
Labels: Lennon

Change is In The Air

I have been playing around, changing things here and there on this blog. Don't you love my new header photo? It is the same as on my Wordpress blog but you can see more of it here. It is a little bistro in London. We didn't eat there so I don't know if the sign is correct when it says "great British food". I intend to find out if I ever return.

There was one place that had excellent food. It is the pub that my daughter's family goes to all the time. I believe the name is The George and Dragon. It was a cozy little (well, not really all that little) place where I had this lovely chicken and mushroom dish --- no photo. 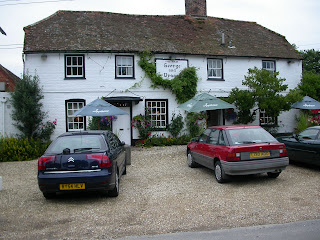 I do, however, have a photo of what my husband ate -- he didn't manage the whole thing and ended up sharing which made everybody happy but it made a great photo! 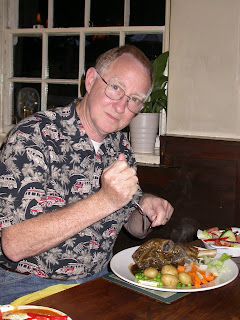 Well, this was my experiment to see if I could do photos again on this blog and it appears that I can so I may be posting here more often.
at December 05, 2010 2 comments:

Ok, so I can now post pics on this blog -- wonder if I should move back or should I maintain two? Funny question since I can't maintain one but I will have to give it some thought.
at December 04, 2010 No comments: