It is Friday, It is Texas, It is Autumn Which Would Explain -- Cough, cough, sniffle--

Yep, seems some determined allergen has blown up my nose.  I can't imagine how since I really haven't been out and yet, here I am, at the beginning of a gorgeous weekend taking Mucinex and anticipating a dose of Benadryl later on -- closer to nap time.  The nose is stopped up, the chest is a tad tight and the ears are all muffley and popping -- yes, it is autumn in Texas.

I don't really have much to post today -- the recent rant has left me wordless -- probably a good thing.  I am still reading "Duane's Depressed" and it is so enlightening -- expresses a lot of what I am feeling/thinking about right now.  Larry McMurtry is such a fantastic writer with such understanding of the human condition.  It is amazing and I haven't really been able to put this book down for long. 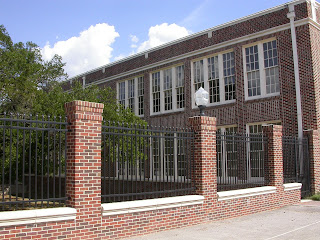 However, my husband is a diabetic that is a very picky eater.  By picky, I mean no soup, no stew, no casserole, no food mixed together at all unless it is Mexican food, no sauces .....you get the picture.  So, it makes it really difficult to feed the meat-and-potatoes guy when all he wants is what he shouldn't have.  I still plan my meals according to the above mentioned junior high school cooking class plan -- a meat, a starch, two sides and, of course being from the south, iced tea.  Doesn't sound like it should be too hard, does it? Ha! The Hubs cooked last night and it was delightful -- a fantastic t-bone that he grilled right here on our patio during a burn ban -- loves living dangerously -- roasted fresh corn and a baked potato.  Too many carbs for the diabetic and a whole lot of red meat for the bypass survivor (him, not me) but it was scrumptious for sure.  He was even lauding himself for only dirtying two plates and a platter.  That was good for me!  Anyway, I digress ... I went online this morning looking for a meal planner to print out and threw that idea right out the door.  I mean, why use printer paper and ink when I can either print one and have it laminated to use like a dry erase board, buy a dry erase board, or use some of the notebook paper I buy in huge quantities during school supply sales.  Why?  I have no idea, force of habit, I guess.  Anyway, I found some lovely calendars to be printed here many of which would be useful if you are designing your own planner.  I might give it some thought but for now, notebook paper it is.  A spiral notebook might be a good idea as well and then you have a permanent record of your menus.  That might be preferable to the notebook paper.  This will definitely take more thought as I don't want to be wasteful.

The summer's heat has taken a huge toll on our garden and it isn't looking so good.  We had considerable landscaping done about three years ago and even some of those established plants are suffering.  However the cannas are thriving and actually flourishing. 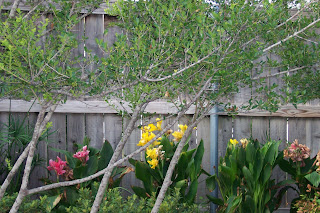 We also have a couple of interesting little creatures living under the kamado. 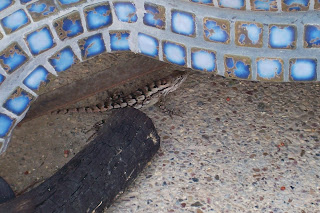 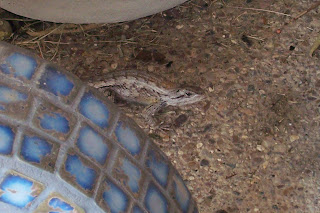 As best we can tell, they are male and female -- don't ask how I know that - one is just smaller -- so I won't be surprised if we have a bunch of tiny ones running around.

Last year I decided to plant a mint plant in a pot and true to my gardening form, it died a swift death.  However, this year it came up -- in the flower bed! I told the Hubs that unless he wanted it to take over everything he needed to move it to a spot on its on and he did and this is what it has done -- 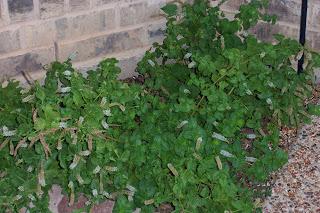 It has again surfaced in the flower bed and we will be making another mint bed on the other side of the patio soon.  I always heard that mint was hearty and difficult and I guess what I heard was right.


We made some silly bird feeders to try to lure the birds back after the building mess behind us was finished -- they are coming back and hopefully the bunnies will too.  I have heard via the neighborhood grapevine that the coyotes are alive and well -- and have gotten into the neighborhood. 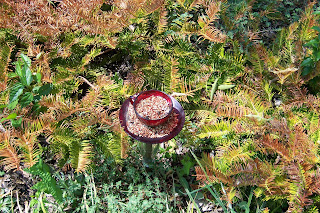 We planted some verbena to complement the lantana and invite the butterflies into the yard. 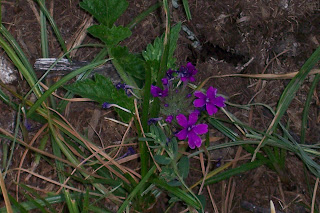 And, thanks to Bean, we successfully installed our attack cat -- doesn't seem to be working too well as we now have a rather large, fuzzy, orange cat semi-living on our patio which I don't particularly mind except that he/she/it decided to try to get one of our cardinals and that just won't do.  I haven't been able to catch a snap yet -- maybe in the morning. 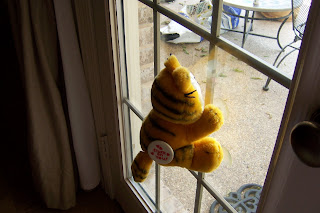 So, that is life in our garden.  After the year-long building project behind us and the hellish heat, I think it might be coming back to life -- if the allergies don't kill me today I think I might just enjoy it outside tonight and see what sort of photos I can capture.