The question today is "do you judge a book by its cover?".  Unfortunately, yes, I do.  I have read some really lousy books that way, too, and I am sure I have bypassed some wonderful books for the same reason.  I can't help it, I love a pretty book!
at October 17, 2011 2 comments:

Email ThisBlogThis!Share to TwitterShare to FacebookShare to Pinterest
Labels: Musing Mondays
And this one time -- at the grocery store --


Since Hubs retirement, we have been sort of tap dancing through our days trying to sort out our roles.  He seems to be under the impression that because he is no longer working at a job outside of the home that all his time is playtime and that my job goes on without a hitch -- clearly no "retirement".   It seems that we have traded places -- he is home and I am babysitting the Bean and so I am gone and he isn't.  When I came home a couple of weeks ago I was more than a little miffed to find him sitting in the same chair watching the same television that I left him at in the morning.  We are working on this little hiccup and, in an attempt to mend his evil ways, he decided to do the grocery shopping one day.  We frequent a grocery store that is a spin off of the store that he worked at when we were teenagers.  It is different than the regular chain and has different things and a huge wine section and many organic fruits and veggies.  They also have a large bakery which, honestly, I am not all that taken with.  I tend to prefer my homemade bread machine bread.  But, I digress.  The day he went they had put out a lot of muffins that can be bought individually so he called and asked me if I wanted one.  He gets really excited about these muffins because they do have some sugar-free varieties. So, I said yes and to get me one of the white chocolate apricot  ones.  I couldn't wait for the evening to get here to sit down with my tea and my muffin and watch "Parenthood".  Well, I took a bite from the top and it was really salty but I thought I was just an odd bite and I dove into the middle.  It was all good until I got a piece of the edge -- VERY salty and a little chemical tasting.  I gave a bit to Hubs to taste and he couldn't swallow it and the next bite -- I know, why was there even a next bite -- I figured it was poisoned.  If the store hadn't already been closed I would have returned it but instead I sat there wondering if rat poison tastes salty.  I figure somebody either got the sugar and salt mixed up or put too much of some additive in it but whatever happened it was exceptionally bad and I spent the rest of the evening trying to decide if I should look for the ipecac or call a lawyer.  In the end, I did nothing and I was fine but I have pretty much decided to eat only my own food from now on. 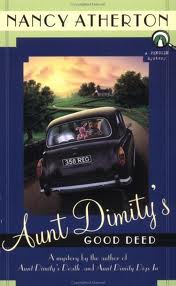 I have finished Aunt Dimity's Good Deed  and, as with the other's I have read in this series, enjoyed it thoroughly.  In this "episode", if you will, we were introduced to the extended Willis family which builds on the previous two books.  While these books can be read alone, it is great fun reading them in order and learning how all the  people fit together without just going on a brief back story description.  I will be starting the next one, Aunt Dimity Digs In, tonight.

I have also just finished When the Light Goes by Larry McMurtry.  It is the sequel to Duane's Depressed.  It is just as funny and poignant and quite a bit shorter than the other books in the series and it was a quick read.  The book begins with Duane's return to Thalia from Egypt, only a two week span of time from the end of the previous book, but things have changed and not for the better.  He makes some major life decisions, has some major surgery, and starts his life over for the second time.  When I began the book, I figured that it would end with Duane's end but I was very wrong -- didn't see THAT one coming! Yep, not gonna tell you -- you will have to read it yourself. 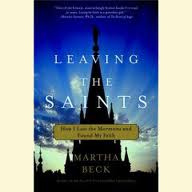 I have also been working at reading a book entitled "Leaving the Saints" by Martha Beck.  I have had it on my shelf for a long, long time and I think I bought it because of a tv interview.  Well, I decided to give it a go and now I am going to give it a toss.  It is about a woman, the author, who is the daughter of a high ranking leader of the LDS church.  It chronicles her major health problems as well as her quest for some sort of spiritual understanding and peace.  The book started out a bit disturbing but when she started discussing flashbacks and describing the horrible abuse she was subjected to by her father from the age of 5 to 8, well, I was done.  The book is frank, graphic and horrific and I cannot continue to read it.  I am sorry, Martha, for what you went through and for your dysfunctional family and I really hope you regained your health and found peace but I will never know because I cannot read your book.  Had I known the contents of this book I would never have purchased it but it won't have a place in my personal library.  I am sorry. 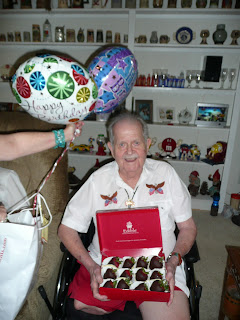 And, on a sad note, the last remaining member of my dad's circle of friends has passed away, night before last.  I cannot remember a time when Jim Houston was not involved with our family. He was a character with a good heart and he will be missed. I was invited to his 90th birthday party but couldn't go so I sent him some chocolate covered strawberries and balloons and he put the balloons on his wheel chair! He apparently got a real kick out of them. As I told his daughter, as long as he was still around I felt like part of my dad was still around but now he is gone.  I told his grandson that I can just picture him and his wife and my folks sitting around catching up -- I am sure my dad was there to meet him on the other side -- him talking remote control airplanes while my dad doodled cartoons on a paper napkin.  Yep, that's what they are doing. Rest in peace, Big Guy.
at October 17, 2011 3 comments: