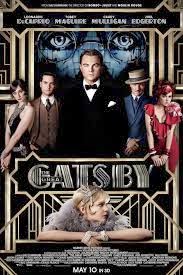 In a recent Facebook conversation with some younger folks, the subject of required reading in school came up.  The youngsters were discussing what they were required to read and The Great Gatsby by F. Scott Fitzgerald was mentioned.  When I responded that I had never read the book shouts of horror reached the heavens.  I further explained that it wasn't required.  More shouts.  In my defense, I threw out titles like Beowulf and Canterbury Tales but that did not impress.  Somehow, because I had not read The Great Gatsby my education was in question.  So.......I stopped by my neighborhood Half Price Books and picked up a copy and read it.  Now I don't have to be ashamed of my lesser education -- I have been duly instructed in the writing style of Fitzgerald.

F. Scott Fitzgerald, born in 1896 (the year of my grandfather's birth) in Minnesota.  He attended Princeton University and published his first novel in 1920.  He married Zelda Sayre and lived between New York, Paris and the French Riviera.  He was part of the expatriate group including Gertrude Stein and Ernest Hemingway. He went on to write such masterpieces as The Beautiful and the Damned  and Tender is the Night.   He died in 1940 of a heart attack.  Fitzgerald is acknowledged to be one of the most important American writers of the twentieth century.

I enjoyed the book a great deal but honestly, I feel like I have read it before.  I know I haven't seen any of the movie versions but it seems hauntingly familiar to me.  The setting in this book was lush.  I was taken back to an era that I have only read about -- the jazz age.  I could envision the extravagance of Gatsby's lifestyle, the alcohol, the dresses, the lifestyle of the rich and famous of the 1920's.  I could almost feel the cool breeze blowing across the patio and the party goers broke into their intimate groups.  I could see Gatsby standing at the top of the steps surveying his world -- the world he built for Daisy.

From the beginning I thought the character of Gatsby to be sad.  With all his wealth and opulent lifestyle, he seemed to be the loneliest, most insecure man on the earth.  I disliked Tom immediately and I felt that Daisy wasn't what she appeared to be.  Jordan seemed to be cool, level headed and not willing to put herself on the line for anybody.   The story is told from the viewpoint of Nick Carraway.  While he seemed to be curious and somewhat awed about Gatsby and his life he was also frustrated by it all.  He was caught up, for three months, in Gatsby's world but he never really became a part of it.  It seemed that Carraway was the most grounded of all the characters.

The plot progressed nicely.  I really enjoyed the interaction between characters -- it was a good window into interpersonal relationships and mores of the time.  As was noted by the New York Times "gin was the national drink and sex the national obsession" as was evidenced in this work.  Yet, while life had a definite wild side, there was still a decorum to be upheld.  The reader knows what is going on the book -- read between the lines -- but it is never overtly discussed -- it is assumed.  The book flows well an it is difficult to put down.  It is a short read and goes quickly.  I enjoyed it and would recommend it.

There -- I feel like I have just written a book report and I guess I have.  Now, I just might watch the movie.