My Sunday In Photos


My DIY restaurant meal tonight was grilled cheese sandwiches with potato leek   soup and left over cole slaw.  I tried a new brand of organic soup and the Hubs didn't like it so I guess I will have to dig up the recipe I have used before and make it myself.  It wasn't difficult, if I remember correctly, but not nearly as easy as popping the top on a container.  Oh well, I will just make it a day ahead and reheat.  Most things are better the next day anyway, right?

So, when we get done with our tv viewing for the evening, I will be retiring with my current read -- Aunt Dimity and the Next of Kin.  I hope your day was as good as mine!
at January 11, 2015 2 comments:


In yesterdays blog post I was lamenting the daily exercise of cooking dinner.  It is clearly not one of my talents.  I did some thinking about why that is and came up with the idea that when I cook a meal, I mentally go back to my junior high school home economics class (gotta love Mrs. Chappell)  and try to make meals according to the 1962 plan.  It is a good plan -- meat, a starch, two vegetables, fruit and a piece of bread.  It was very balanced and I am sure very good for you if the meal is prepared well.  However, that is not how the Hubs and I REALLY eat.  So, every evening when I try to prepare the 1962 preferred dinner, my husband just sort of pushes it around on his plate, eats about a third of it and says he is full and leaves.  Now, either it is too much food, he doesn't like my cooking, he is tired of chicken or it just isn't the restaurant food his palate has become accustomed to.  So, in an attempt to make the whole thing a bit more pleasant for both of us, I decided to give making restaurant meals at home a try.  I don't mean take-out -- just meals I cook that are basically what we get when we are out.  Here is my first attempt.

We regularly stop at Church's Fried Chicken and grab some chicken strips and sides.  Do we love fried chicken?  Not really.  It is just a convenient stop on the way home from babysitting.  By that time of day we are tired and way past hungry so the chicken, being the sheer comfort food that it is, is just a handy thing to get.

Here is my meal -- the chicken is breaded in flour, egg and panko crumbs, drizzled with a bit of oil and baked in the oven.  The potato is a recipe I found on pinterest.  You thinly slice a baking potato, without cutting through the bottom, drizzled olive oil on it and sprinkle it with whatever seasoning you like.  The idea is that it will come out with little slices that you pull off that are crispy on the outside and creamy on the inside.  I included these potatoes because I don't like making or eating french fries (my husbands preference) -- I am a mashed potato kind of gal -- so I thought this would sort of satisfy both of us.  I have to say it didn't work well.  They didn't get done enough even after doubling the cooking time. I think my potatoes were too big and we could have done with just one and shared it.  Anyway, I will give it another try another time.  The cole slaw is a recipe from the Frugal Gourmet cookbook.  It is called One Week Coleslaw.  It is really good and makes enough to have again during the week.  It lasts a long time, hence the name. I have been making this recipe for years and it is my go-to cole slaw recipe. 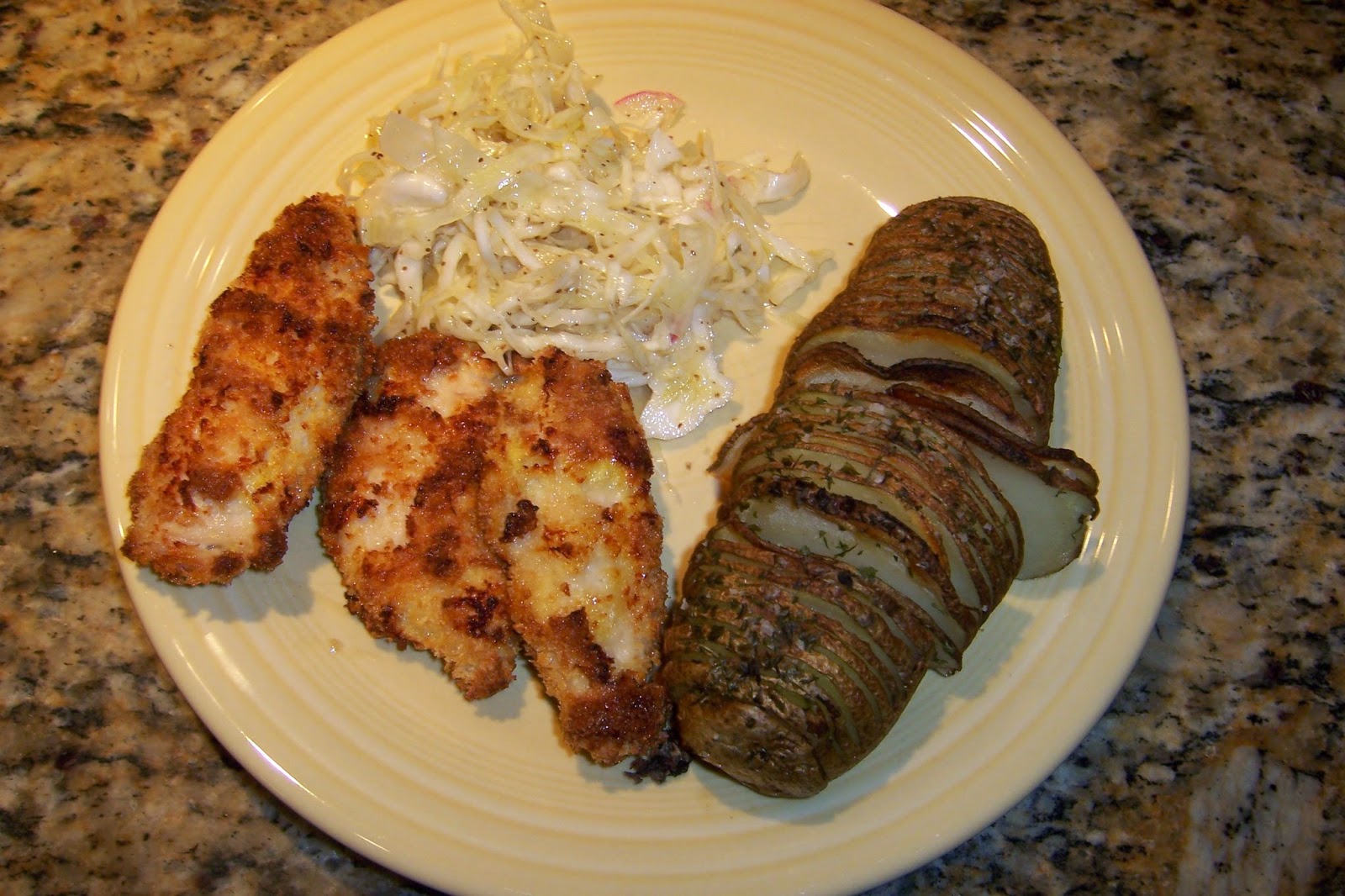 Then, I decided to try my hand at scone making. I routinely buy them, either plain or apple, at a local grocery store but after eating those made by our assistant rector's wife, I knew there was something better out there.  So, I found a recipe that I had pinned to my pinterest board and went to work.  I was really surprised at how easy they were -- I was expecting something very complicated.  The recipe had a few variations with it but I didn't have any dried cranberries and I didn't want to add currants so I threw in about a third of a cup of chopped walnuts and mini chocolate chips.  This was the finished product.  What do you think?  My first attempt and they still better than the grocery store variety. The tea is Household Blend from Fortnum and Mason, a gift from my daughter.  The tea towel is from a friend. 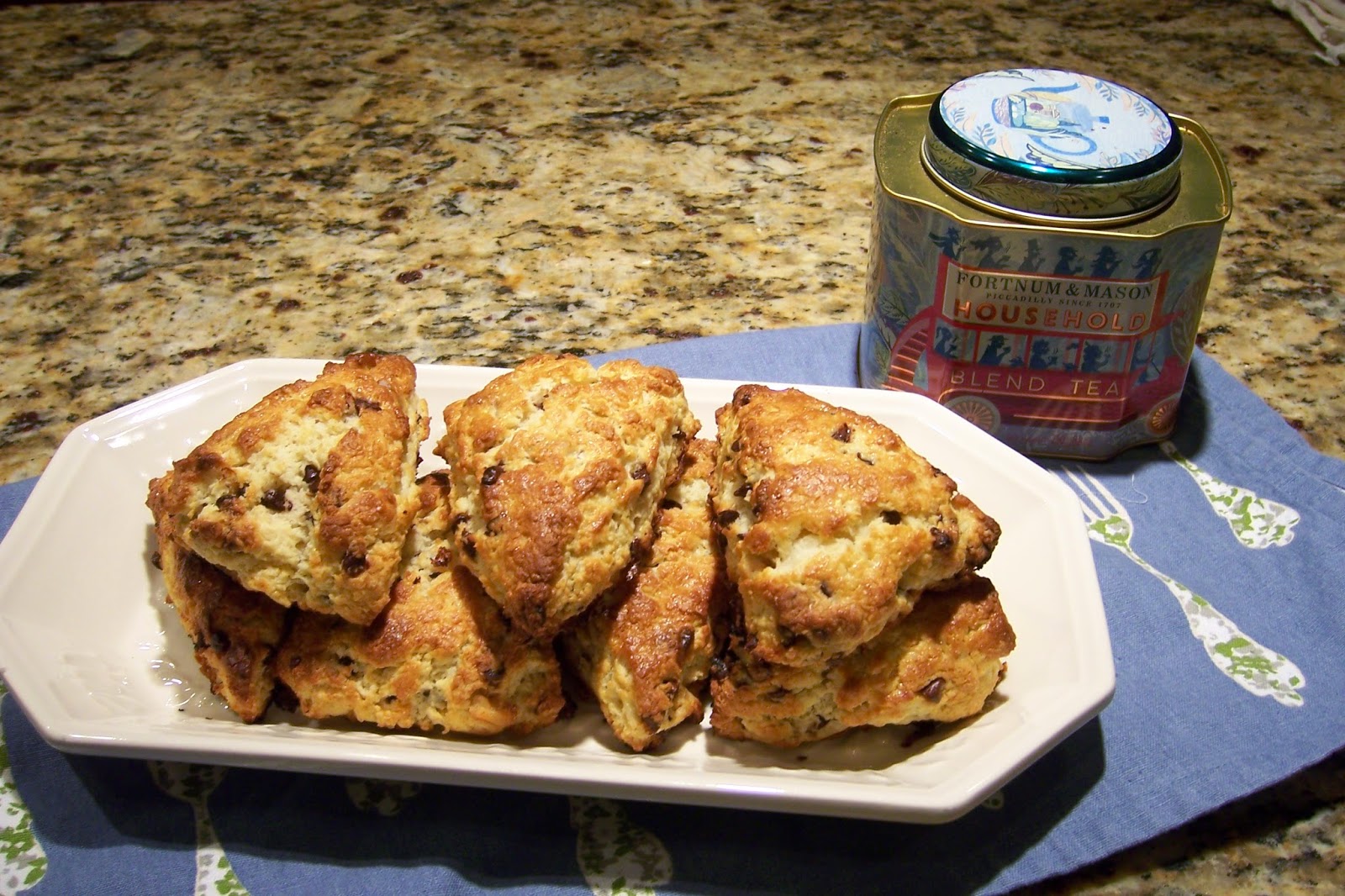 So, I added this menu, with the notes about the potatoes, to my household notebook.  I am not sure what I will have today -- maybe soup and grilled cheese - but whatever it is, I am eating out of the pantry and freezer for a few days this week before I head to the store.  Things are piling up and need to be used so our meals could be a bit creative.  At any rate, I think it is time for me to get Mrs. Chappell out of my head and move on to real life meal planning.

The next thing on my list to try is Tres Leche cake.

Tres Leche cake (three milks) is a traditional Mexican cake which is so good that you just know you shouldn't be eating it.  It is made up of a sponge cake that has been soaked in sweetened condensed milk (Eagle Brand), evaporated milk (Pet or Carnation) and whipping cream.  It is generally served with fruit and whipped cream.  It is about a gazillion calories per square inch and absolutely wonderful.  We go to a local restaurant that has lovely food and this cake.  A slice, to share between us, costs about $9 and I think that is sort of ridiculous.  So, I am going to try my hand at it.  There is a good recipe by Ree Drummond of Pioneer Woman.  I need  to make this when I have company though because there will be way to much and I. Will, Eat. It. All.  That can't happen so I will wait for guinea pigs at my table.

So, that is how the first DIY restaurant meal turned out.  The Hubs didn't complain, he ate most of it, and that was a good thing.  Another instalment soon.
at January 11, 2015 2 comments: