Way back when I first obtained an e-reader I went a little mad.  I was downloading books left and right -- many were free, many hugely discounted, many full price and much more costly than I could have gotten elsewhere but I was having fun! The ultimate cost of that "fun" was that I have an e-reader full of books that, after further review, I am probably not so interested in.  However, with my inability to throw books away -- even digital ones-- I decided that it would be a great idea to just start reading through the list and then alternate with reading a physical book off the shelf because that is quite a list to go through as well.

So, I was in the car one day looking for something to read and since I wasn't anywhere near a wi-fi connection I had to settle on the one and only book that I hadn't archived.  It was entitled Lush by S. L. Baum. 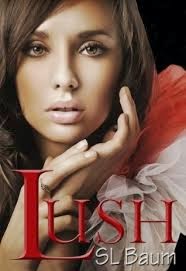 I remember buying this book on the strength of a review but thinking at the time that it was an extreme diversion from my usual fare.  However, since I was desperate for something to read and this was the only title I could access I decided to give it a go.

It is a young adult (YA) title, dystopian in genre and not something I would ordinarily seek out.  The story centers around a 17 year old girl named Bluebell living in a futuristic country called Concord.  Bluebell, as she finishes her time at Training Tech and is moving toward being assigned her career is shocked and somewhat dismayed when she is branded "lush".  It is a special brand and she is the only person who has received that brand in twenty years.  "They" don't remember the last person to receive that brand, "they" just remember there was one but don't remember what happened to her.  There are a lot of things "they" don't remember.  This, however, is the story of Bluebell and I won't say more because anything I say would be considered a spoiler.

I didn't expect to get hooked by the book.  I figured I would get a few pages in and get bored or just put off by it but I didn't.  It didn't help that it ended in a cliff hanger.  I had to read the next book in the series.

That book is titled Hush.  The story continues with enlightenment and awakening and a general feeling of unrest.  There is a movement afoot that is going to come to some sort of climax. 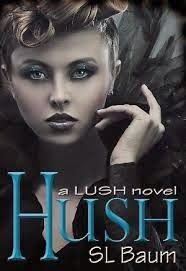 In this book, the younger citizens of Concord are beginning to realize that the control over their lives, by The Council, isn't in their best interest after all.  They realize they have been lied to and that life in Concord isn't what they thought it was. 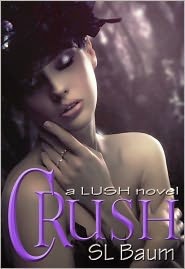 Crush is the final book and from the title you would expect some huge conflict -- a battle so to speak.  This is where it all fell flat.  There was a rather big build up to the end and the reader would expect some sort of an event -- I mean, when you think of a group overthrowing a government you think in terms of a bigger conflict and I kept waiting but it never came.  There was just not the bravado that  I was expecting.  It all just ended in a rather uncomplicated way which didn't gel with the rest of the story which was filled with complicated descriptions and situations and relationships.

While the books were compelling enough to obviously keep me coming back for more -- I mean, I had to see what was going to happen next, like on "Days of Our Lives" -- I was disappointed in the ending.  I was expecting something a little bit more like "The Lottery" or "Anthem" -- a little more drama.  I almost felt like the author was tired of writing and just tied things up quickly to get it done. I didn't enjoy the ending.

However, when I sat back and thought about the intended audience I suppose the author was trying to keep an age group in mind but, with that said, I just thought there could have been more.

Would I recommend?  Well, if you like this genre and are a young adult of about 13 years old, then yes.  There wasn't anything particularly frightening about it like the above mentioned titles.  There was no violence or sex.  For the most part it was pretty sugar coated and I think, for the intended audience it was fine.  For me, not so much.