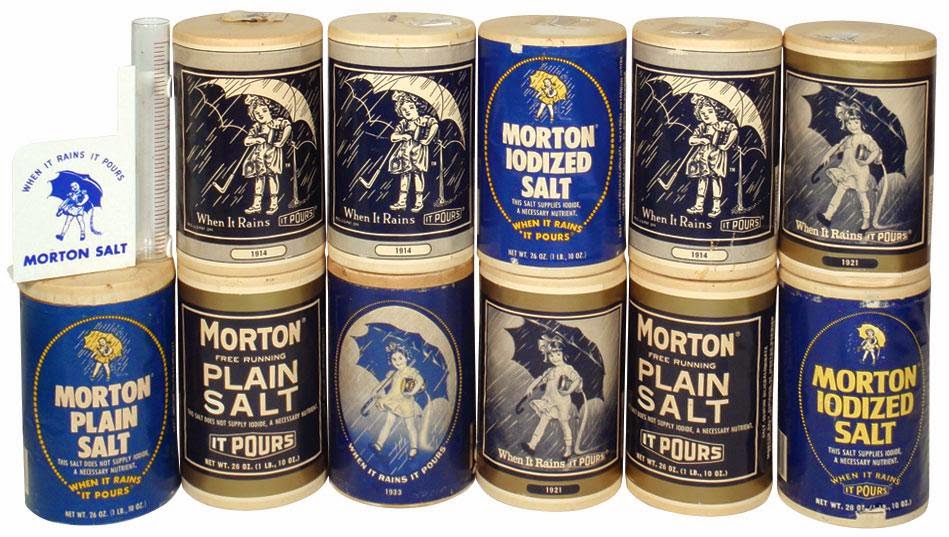 Morton Salt -- this is the brand of salt I grew up with and still use to this day.  Below the little girl with the umbrella reads the saying "when it rains, it pours" meaning that even if it is humid or damp the salt doesn't get clumpy.  All my life when the things of life began to pile up, overlap, hit hard we would always say "well, you know, when it rains it pours".

That is especially true of this last week.  Last Thursday my son-in-law - the one who NEVER gets sick -- got sick.  I don't mean he felt under the weather I mean he contracted some sort of vicious stomach/intestinal virus that is apparently going around.  By Sunday he was stirring around but he looked like he had been through the wringer.  He returned to work yesterday, exhausted and not 100% and he came home to .....

my daughter not feeling up to par and when the phone rang at 11:15 last night I knew something was wrong.  Yep, she had it.  It was official.  All the symptoms including a fever.  She needed her mommy.

So, I expressed the concern that I didn't really want to get sick and even though I was at their house babysitting the Bean while the SIL was ill, I didn't go around him -- he was sequestered in another part of the house so I felt like I wasn't really exposed but I knew it wouldn't be that way with my daughter because I am the mommy she needed.  So, I took down the grocery list and we headed her way this morning knowing that we would not be staying -- SIL had taken off work to take care of his lovely wife.   Groceries procured I walked into the house only to find my SIL looking overwhelmed, daughter looking terrible, feeling terrible, running a fever and whining that I was her mommy and I was supposed to make her feel better (wish I could!), and the Bean tossing her cookies, pale as a ghost, sitting very still and not talking.

All I wanted to do was spray them all down with Lysol.

But, I am afraid it is too late.

Maybe it is just my imagination.  Maybe I am just having sympathy pains.