For the past few years I have been a member of a religious order known as the Daughters of the King. 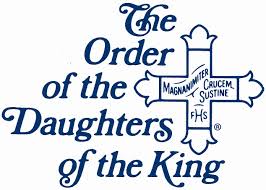 I am no longer a member of that order by choice.  Our diocese has gone through a huge change by leaving the American Episcopal Church.  Our diocese was involved in a lengthy and ugly battle for our property.  Our diocese was in litigation for over five years but we did come out the other side with our property and so we begin again.  We are no longer called "Episcopal" as in aligning ourselves with the national Episcopal church but we are now Anglican and aligned with the larger Anglican Communion and the ACNA.  The daughters who were involved with the DOK have now been offered an alternative that they could take although not required.  Some of the daughters have chosen to stay with DOK but I have not.  I am moving forward with the discernment period for the Daughters of the Holy Cross. 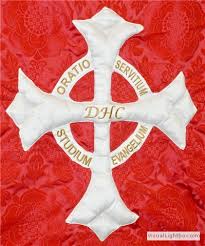 Not being a cradle Episcopalian all of this didn't affect me quite like it did others although I didn't relish the thought of arriving for church of a Sunday morning and finding myself locked out and on the curb.  I do care deeply for my church and the people an clergy therein and I don't like the idea of having to seek out a new place so I am moving forward in this new reality.

The emphasis in DHC is a bit different than DOK.  DOK is all prayer all the time which is what drew me in because I figure as a common person I can't do a lot but I can pray and believe in the practice wholeheartedly.  DHC focuses on prayer as well but equally weighted are evangelism, study and service and that is to be our rule of life.  I am on board with all that but I have to say that study is my hardest -- getting into the Word is so overwhelming to me.  I need to work on that.

It was suggested in DOK that we keep a prayer journal and there was even a meeting to show us how to make one.  For some of our avid scrapbookers it was an opportunity to be very creative.  I didn't go to the meeting and I never made the prayer journal -- popcorn prayers seems to be my go-to method for prayers.
It was also suggested that we keep a prayer journal for DHC and I have taken that to heart and realize that I could benefit from being a little more organized in my approach to things.  After getting started I also realize that this isn't something that can be "done" like a scrap book.  It is an evolving thing.  It is almost a living thing.  So, when I first started building this I realized that it isn't an activity that I can sit down to and be done - it is ongoing and I needed to just relax and realize that.  Also, I see that it has the potential to become more of a Rule of Life journal rather than just a prayer journal  as we work our way through this discernment period.

So, anyway, this is my journal.  It is very plain and very humble but I hope that it helps me focus on this part of my life a little better.

I took a plain 7X9 sturdy plastic binder and outfitted it with two sets of plain dividers and appropriate paper. Although not a scrapbooker  I found some faith-affirming stickers to add to the dividers to keep me inspired. 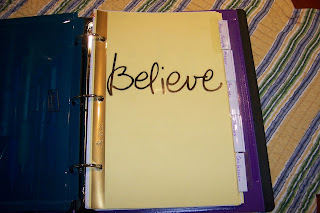 I labled each divider with things that I thought I would like to include in this journal.  I will probably change that around as I go because I was very specific but who knows, I might become even more specific.  We will see how it and I grow. 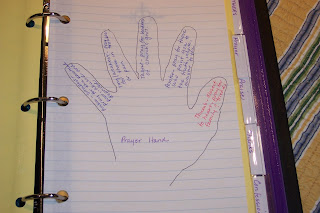 This is a cute little prayer prompt that I put in the section labelled "prayer prompts".  I used Bean's hand for this and showed her what I was doing.  She wanted to know which finger was for her!  I think that my prayers, except for the morning and bedtime prayers, are going to be written.  I think my mind won't wander so much.  A lady I know writes her prayers in a letter to God and I think that sounds so personal and real.  Also, I did find a site on Pinterest where the author gives you a daily prayer prompt to write about and I think I am going to start there. 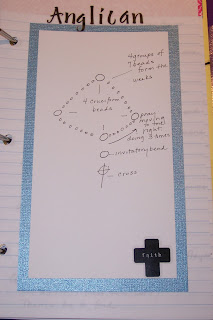 I added a section for the Rosary -- I started with the Anglican Rosary, drew it out and added some prayers on sheets behind it.  I have always just used this rosary with my own choice of prayers, mostly the Jesus prayer, so I did a google search and found some really nice prayers to use here -- my favorite is the Celtic prayer.

I will also add the same for the Roman rosary as that is what we use at church.  It will require more drawing and more writing but I did load a Rosary prayer app to my tablet which will be helpful.


I have a section for Scripture Study that I plan to use  as I work on getting into the Word.  Not my strong suit here so I decided to make the pages a little fancier -- maybe a bit inspiring. 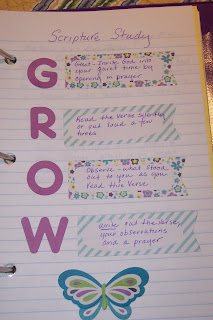 As I said earlier, study is overwhelming to me -- I question why I haven't read the Bible cover to cover, I question how I would even do that, I have tried starting with the Old Testament but I have to say that, as much as I love genealogy, I always get hung up on that part.  However, I was always taught that to understand the New Testament you have to have read the Old Testament so that is where I always start.

So, trying hard to move away from the idea that you have to read the Bible front to back in order, I was intrigued by the mention in an earlier discernment of lectio divina -- 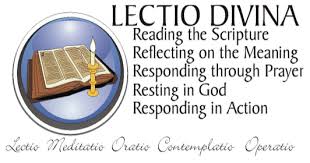 This made sense to me -- don't try to read the whole thing at once, do this and it will be a joy rather than something to be endured.  Baby steps.  I can do that.

The tools that I am going to use, other than my journal, are these -- 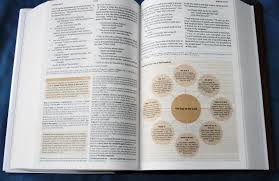 A good study Bible that I can write in -- I have one but it isn't easy to read so I am going to have to work on that. 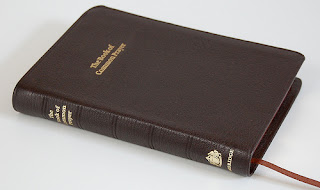 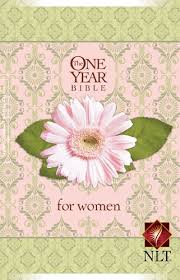 A One Year Bible for Women -- this is a Bible that is divided up differently -- each day you get a passage from the Old Testament, the New Testament and Psalms.  I think that would be beneficial to me as I approach this new endeavor.

Another thing that makes this group different from DOK is that there is the expectation of service -- a service project.  I think that will be good for all of us -- it sort of completes the circle in my mind.  We haven't touched on that yet, it is for the upcoming weeks but I am looking forward to what my fellow Daughters have to offer.

So, that is what I have been up to.

Don't worry, dear Readers, I am not turning this blog into a diary of my spiritual journey.

And On We Go

Here are a few photos of the progress in the front of the house.  I didn't take "before" photos so just picture a dozen or so hawthorn bushes that were not doing particularly well.  I believe we have had so many plant problems because this house was built on rock -- yes, rock -- and topsoil was brought in for landscaping purposes but it isn't all that deep and I think it just can't sustain all the big bushes and such that people have put in.  So, anyway, here is the front --