For the last several summers we have had families of cardinals living in our yard and the one next door.  I noticed our latest couple a few days ago but managed to get some snaps this morning.

They are very pudgy and the cool weather this morning has made them very frisky - if you can call a bird frisky.  At any rate, they are all over the yard and burrowing down in the jasmine -- I wonder if they are what is stealing my strawberries?

So, anyway, meet the little couple!

Sorry for the poor quality of the photos but I was inside the house and every time they saw me move they took off so this was the best I could do!
at April 22, 2017 2 comments:

My husband and I have always been a pretty good match in all areas.  I guess that is why we have stayed together for so long.  However, as we have gotten older we seem to have different ideas of temperature.  He is always cold.  I am always hot.  Now, during the day that doesn't seem to be a problem but at night....totally different story.

I have always liked comforter sets  -- you know, with the matching components but I really don't like pillow shams.  They are a nuisance.  So, three or four years ago I bought an American made heirloom bedspread.  I had two of these when I first married and I really liked them, too.

This is the exact bedspread that I bought-- a Bates-style bedspread which you can get with pillow shams or long enough to cover the pillows.  This was important because my husband is paranoid about having the pillow covered. He seems to have a "thing" about dust. 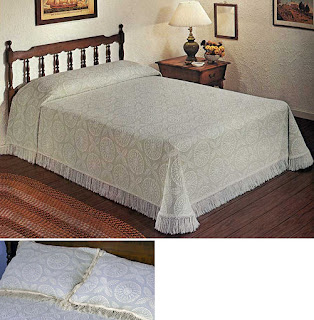 The only problem with this is that my husband wouldn't sleep under it -- he said it was too heavy even though it is one of the "lightweight" bedspreads offered.  So, he would roll it all the way down to the foot of the bed and then pile a quilt on top of him.  Sometimes two.  No, I didn't understand either.

Because he is so cold all the time we also have two cotton blankets on the bed as well.  Needless to say that I -- in my permanent hot-flash state -- was miserable and I told him we had to do something so off came the quilts and I have forced him to sleep under the blankets and the bedspread.  He has adapted.

However, I have been thinking about a down alternative comforter and a duvet cover.  I like the way Europeans use a bottom sheet and the duvet and that is all.  Simplifies bed making for sure.  However, not a problem here because our rule is the last one out is the one who makes the bed and it is NEVER me -- I am an early riser -- or at least early enough to not have to make the bed.  Haha!

So, we went looking and then I went to reading.  After reading several articles I have decided to stick with my bedspread/blanket combo. There were a lot of negative reviews of duvets and honestly, I can't imagine wrestling to get the comforter back in the duvet each time I wash the sheets.  Yeah, no.

So, I have decided to stay with what I have but I still have the problem of too-cool-hubby and too-warm-moi -- So, what did we do about that?

Since it is now early summer here in Texas (seems we didn't feel the need to do spring or winter this year) I have insisted on turning on the ceiling fan.  I woke up to find Hubs with all the layers of bedclothes pulled up to his chin.

However, he isn't complaining so I am leaving well enough alone.