This year I had the honor and privilege of helping my daughter with her Girl Scout Daisy troop.  This was their second year as daisies and a busy year it was! There were service projects like making dog toys for the Humane Society and collecting used eye glasses.  They learned new things like compassing while visiting a nature preserve. They studied their faith during Jubilee Year of Mercy. They laughed, they cried, they giggled, they ran, they turned cartwheels and tonight...

That means they completed their second year as Daisies and tonight they became full-fledged Brownies.  In order to do this certain criteria had to be met.  They had to have an older Brownie talk to them about what it would be like next year as they start their time as Brownies.  Then, in turn, they had to talk to a younger Daisy about some of the things they did during their time as Daisy.  For the most part, we could do any sort of ceremony we wanted -- it could be simple or elaborate, indoors or outdoors, short or lengthy -- but we had to have a physical bridge. 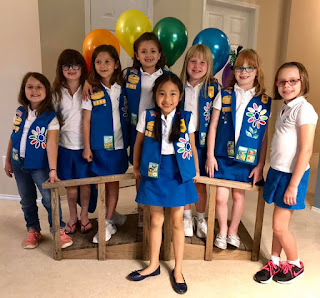 So, here are our girls on their bridge.

And, of course, there had to be cake. 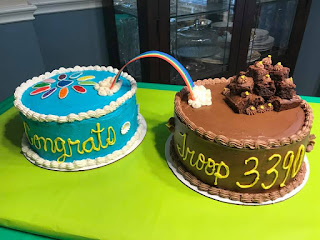 So, our girls are growing up -- they are Brownies now! One even told us that she thought she had grown as she walked over the bridge.  I wonder which one that was?