Good morning!   Finally had a few minutes to chat for a bit.  Things have been very active of late between doctor appointments, trying to help get Bean straightened out, having some work done around the house and forever trying to housebreak this little fur monster we live with, it is never ending.

I had my annual oncologist appointment and all seems to be well, don’t need to see him for another year. I do believe I need to visit a cardiologist though, and I am due for an eye appointment. I dread the eye appointment because it is all the way across town by our old house and I really want to find somebody closer but I don’t care for breaking in new people, do you?  I have given up on dealing with my knees and just figure they are part of getting old.

The hubs has been painting the inside of the house which is going much quicker than I thought it would. Several weeks ago we ordered plantation shutters for the windows and they have been delivered and installed.  We need to work on the bathrooms which are covered in rather dated wallpaper. Dealing with wallpaper removal is dreadful. We might end up just re-papering over it. A pain either way. 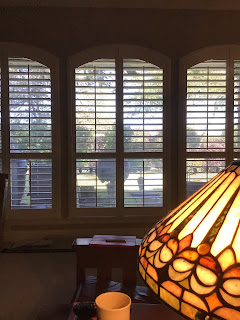 Girl Scounts has been particularly active.  We had a birthday party for Juliet Gordon Low, the founder. It was supposed to be outside but the weather had turned so we had 17 girls and a few parents in the house. It worked out ok though.  Not Scout related but Bean made a lovely Evie for Halloween. 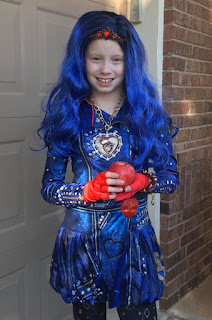 The pooch is getting better about her business. She has finally gotten what the puppy pads are for so the moment some of the frantic pressure is off her.  She is ringing the bells more often than not and the accident are few and far between but when there is one she manages to make use of the pads so life is easier. 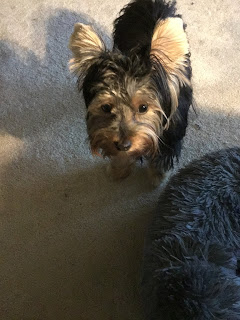 So here we are, already November.  Can’t believe this year is going so quickly!  Not ready to think about the holidays yet even though my neighbor has already put up lights. Too early in my book.

For now that is all the news.  That is ok with me, I like a little calm.