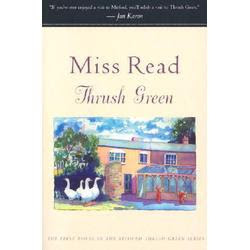 "Thrush Green" is the first novel in the Thrush Green series by Miss Read. It is a very cozy, comfortable book depicting the lives of several village dwellers in the fictional Thrush Green which is the neighboring village to Fairacre of her first series.

The book is centered around the traveling fair that came to Thrush Green every May 1. It details the interactions of the villagers with the travelers as well as with each other. There is young love as is seen with Molly Piggot and Ben Curdle and old love as evidenced by Dr. and Mrs. Bailey. There is comedy involving Ella Bembridge and Dimity Dean that is reminiscent of Hyacinth and Elizabeth (if you are a fan of Britcoms, you know what I mean). There is loss --" "I'll take those flowers to the larder shelf," said Mrs. Bailey, advancing upon them. "No," said her husband and something in his voice made her turn and look at him. He sat very still and his face was grave. "I'd like them left out." Mrs. Baily could say nothing. "We shan't see the old lady again," said Dr. Bailey. "I doubt if she has three months to live."" There is controversy as seen in Molly Piggots drunken, abusive father but none of the negatives are presented in such a way to mar the general impression that this is an uplifting book.

This book is a fast read because the reader is drawn into these characters lives -- it is like you are sitting on the village green watching their days unfold. It is very charming and I would definitely recommend it.
at June 15, 2008 No comments: