San Antonio, Texas is the place of my birth, my parents births, my children's births, my extended family's births -- it is home and always will be. I haven't lived there for the last eighteen years but everytime I return I long to stay yet know I never will again.

My last trip to SA was in April. My husband, who still does business there, had a meeting so I tagged along. He took some vacation time and we made a long weekend of it. Of course, my over productive genealogy gene won't let me get out of the city limits without some form of documentation of my life there. In the past, I have trekked through cemeteries, scoured libraries and cursed myself for not going to the health department to retrieve vital statistic records for every one of my relatives. This time, however, I decided to do something different. I decided to photograph places that were of some importance to me during my years there. Most of these places don't look like they did during my childhood and most have different purposes now. Sadly, a number of significant places in my growing up time just aren't there anymore at all. Most of these places are very old and time hasn't been kind to them. However, I think it would be fun to share these photos in my posts here. I might even throw in some from past visits.

We stayed at the Marriott Rivercenter which is a lovely hotel right on the San Antonio River. In fact, the River is accessible from the lobby of the hotel. We were on the 15th floor so I was able to get this lovely picture of downtown San Antonio. 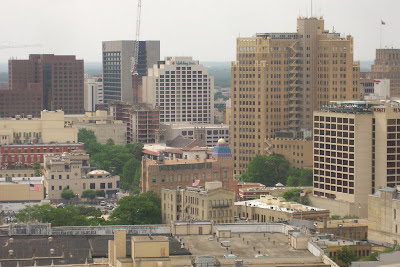 It just so happened that we were there during the week of Fiesta de San Antonio. Fiesta is a week long celebration honoring the heroes of the Alamo. It began in 1891 when a group of citizens decided to honor both the heroes of the Alamo and those of the Battle of San Jacinto with a "Battle of Flowers" -- a parade where floats were bicycles and horse drawn carriages that were decorated with flowers. Over the years it has expanded into several parades including a night parade called The Flambeau, The River Parade and The Battle of Flowers Parade. There are other activites going on also such as A Night In Old San Antonio -- a food fest in La Villita -- the original San Antonio and the carnival. Below is a picture of the carnival as taken from our room. Fiesta has a Queen with a Court made up of the young women from old society families and every year a King is crowned King Antonio. In my youth, he would go to all the schools and give out King Antonio medals to all the school children. I think I still have one but I don't know if he does that anymore. 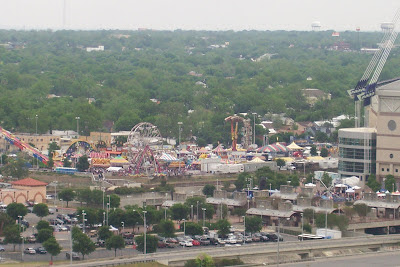 For another entry in the Young Readers Challenge I have completed "The Outcasts of 19 Schuyler Place" by E. L. Konigsburg. This book is about Margaret Rose Kane, her two great uncles Morris and Alexander Kaplan, the towers and probably the most eventful summer in Margaret Rose's life. It begins with her first visit to summer camp. Her parents had gone to Peru for an archaeological dig -- and other things -- and had planned to leave Margaret with her great uncles for the month. Margaret stayed with her great-uncles a great deal and even had her own room so she was looking forward to the stay. However, her uncles suggested camp. It didn't go well. Margaret was rescued my her uncle to remain in their care for the duration of her parents absence. She loved her uncles house because it was special -- it had the towers. The towers had always been there and were magical. And there was Tartufo, the dog that had come from Italy and her new friend and conspirator, Jake. The story is centered around the changing town of Epiphany -- urban renewal and renovation -- and how the new "neighbors" didn't think the towers were appropriate for the new look of "Old Town" Epiphany. The uncles had fought the city council decision to have the towers demolished but it took Margaret, her mothers childhood friends, her camp enemies, her new friend Jake and Tartufo to turn things around, make everybody happy and save the towers for future generations. There were things, however, that couldn't be saved and some very ironic twists but I won't tell you about them, you will have to read the book yourself.

This book is labeled for 10 yrs. and up but Konigsburg has such mature characterization that I think more like 12 -14 would be a good starting point. I completely enjoyed the book and didn't feel like I was reading a children's book. The characterization is impeccable, the settings so well depicted that you recognize them immediately, the mood is consistent with the action and flow. It is a good read and I would recommend it for the aforementioned age group as well as adults.
at July 06, 2008 No comments:

Email ThisBlogThis!Share to TwitterShare to FacebookShare to Pinterest
Unconscious Mutterings (284)

3. top ten -- those record rating sheets we used to get from the record stores that came out on Friday or Saturday

Hmm....these all sound like definitions! Are definitions my first thoughts? How dull!
at July 06, 2008 No comments: