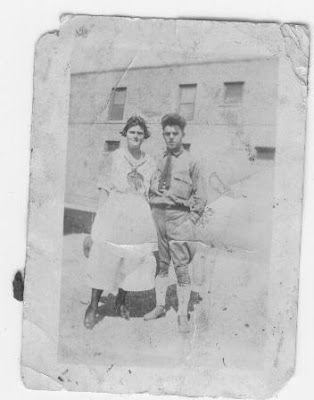 Yesterday was my grandfather's birthday. He was born in Scranton, Pennsylvania on January 10, 1896. Even when I was a child that seemed like a very long time ago. He was born to James and Dinah Davies who had immigrated to Pennsylvania from Blaina, Wales in 1890. Half of his siblings were born in Wales and half were born in the United States and two of his siblings died as babies are are buried somewhere in Wales.

My grandfather's surname was really Davies but a clerical error in the local Catholic school resulted in the "e" being dropped from his name -- not, however from his brother's name -- the brother who stood in line right before him! But, because of that error, Jim was forever more a Davis.

When he was born they had gaslights in their house, outdoor plumbing and he rode a horse to the nearby school they called "the sister school". His feet were so small that he wore the same oxfords the nuns did. When he was eleven he left the sister school and went to work in the coal mines with his father and his brothers, bringing their pay home to Mam. Sounds like a scene out of "How Green Was My Valley" doesn't it. I am sure it was similar.

I think my grandfather was a little scrapper -- he was always in trouble -- so much that his older brother, Louis, had to pick him up from school to keep him in line. I think Louis kept all the kids in line because he carried a whip with him and, from all accounts, he knew how to use it.

In 1914, James Davies passed away leaving Dinah with still young children. In 1918, Jim and brother Dan joined the army and Jim was sent to San Antonio, Texas for basic training. That is where he met my grandmother, Madge Foreman.

In 1918 they married, lived in Scranton for a while and eventually ended up in San Antonio where they raised four children and lived out their lives rather uneventfully. Jim passed away in 1969 with Madge following in 1987.

I remember my grandfather well -- he was short, about 5'4", and small. He was gruff and no nonsense but I think he really liked his five granddaughters. He didn't fuss over us but he took care of us when we needed him to. I remember spending a Saturday in the backyard with him as he picked up pecans that had fallen and as he picked them up I did the same -- the only thing different was he put his in a bucket and I replanted mine in the flower beds. He grumped about those trees coming up in the flower beds for years after. He didn't really get angry though. I used to love sitting at the kitchen table having "tea and toast" or "cheese toast", which was really Welsh Rarebit, with him. I still have the table. He used to take me into the garage and show me where he had the stash of "emergency" money, divided up by denomination in baby food jars --jars of dimes, quarters, nickles and silver dollars. I still have some of the dimes. He was a very precise little man.

I remember many things about my grandfather and I wish I had had the foresight to ask him about his youth, his life in Scranton, his mother and father but I didn't -- I was only 19 when he died and was much more interested in my boyfriend and going to college. I have had to find out all those things on my own with the help of Joy. So, I actually know more about him now than I did then, I just wish I had learned it from him.

Papa would be 114 years old which sounds very old to me. However, when you think about it, in his life span, they went from gaslights to electric lights, from the horse to cars and he was fortunate enough to live to see the first man on the moon. He lived during an incredible time of growth and development and advancement -- more so than any of the rest of us.

So, happy birthday, PaPa -- I wish you were here to see me write this on a computer, put up a photo that was sent to me electronically by Joanie and put it out for all to read. I wonder what you would think about it -- about us -- about our world today. It is something to think about.
at January 11, 2010 1 comment: