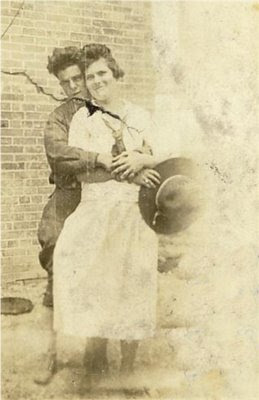 Better late than never, as they say but since I was not feeling up to par, blogging was put on the back burner. However, now it is time to play catch up.

I was born on my grandmother's birthday -- February 28. I guess that was my one distinguishing factor. My name should have been Rebecca since there was ALWAYS a Rebecca in the family -- my mother broke the chain and named me after a popular tune. At any rate, I always thought it was special being born on MaMa's birthday.

My grandmother Rebecca Madge Foreman was born in San Antonio in 1902. She led a very unremarkable life being part of a large family with many aunts and uncles and cousins. She attended Lavaca Street School which I believe is where the current central office of the SAISD now stands as well as Pauline Nelson Elementary School, also SAISD. She won the Palmer's Handwriting contest for her outstanding penmanship. She left school at eleven to become employed at a store downtown -- I can't seem to recall the name of the store -- Joy? A bit later she went to work at the telephone company where she stayed until her marriage in 1918 to James W. Davis who was stationed in San Antonio during basic training in World War 1. Sometime later that year, after armistice was declared, she joined Jim in Scranton, Pennsylvania. I am not sure how long she lived in Scranton but the family had moved back to Texas by April of 1921 when my aunt was born. They remained in Texas the rest of their lives.

Rebecca had four children -- Velma, Bette, Jimmy and Linnie and four granddaughters -- Joy Lynn, Diana Jean, Melissa, Penny Gail, and Lori Ann. She was a good grandmother making clothes, costumes, taking care of us when we were sick, providing stability when things were shaky. She was always a pillar of strength in my mind. If there was a problem, MaMa and PaPa could take care of it.

Rebecca -- who, to my knowledge, never went by the name Rebecca but rather Madge -- outlived Jim by almost 20 years, passing away in the mid 80's. To this day I recall hearing the stories about how, when they moved to the "country" (which meant old Castle Hills, on Castle Lane) she had a cow that she milked. She also raised pomeranian puppies and had chickens. That was a side of my grandmother I just couldn't get my head around. Well, ok, maybe the puppies. I remember her having a huge, grey persian cat named Pretty -- it was a sad day when she lost that cat.

It was a sad day when we lost my grandmother but I have so many good memories of her -- going shopping and eating at Casa Rio -- EVERY Saturday, tea and toast at her kitchen table almost every day, her house, her Spanish Geranium soap -- yep, that was MaMa.