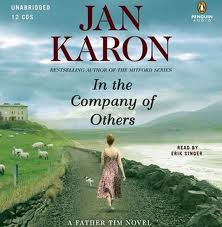 I started reading Jan Karon's works with the Mitford series published in the 90's.  The first three I read were a boxed set that I  received for Christmas.  I was hooked from the beginning.  I loved these books that involved this small town and all the characters that resided therein.  It was like coming home.  They were light books with the occasional heavy aside.  They were religious but not preachy.  They were like going home.  I hated to see the series end.

Then along came the Fr. Tim series.  I was thrilled.    I looked forward to being back in Mitford but this book took Fr. Tim out of Mitford and back to Holly Springs, the town of his childhood.  It was here he had to face the things of his youth that he needed to deal with -- it brought out a darker side to Fr. Tim.  There was a bit of a mystery involved -- a complete new direction from the Mitford Series.  Karon's writing was deeper, more emotional, more involved than her earlier works.  It was Karon -- just better.


Her newest work "In the Company of Other's" just takes her writing to new heights.  It is actually a book within a book, with mystery and family turmoil and emotion abundant.  Without giving anything away, it starts with Fr. Tim and Cynthia taking a long planned and well-deserved trip to Ireland.  Of course, the unthinkable has to occur and their plans get changed not once but several times.  They are caught up in the lives of the family they are staying with and become a part of the family drama and part of the solution.  All of this while they are reading the journal of one Dr. O'Donnell.  I can't say more for it would give away the story but let it suffice to say that Karon outdid herself with this one.  Her writing is so rich and the web is so tangled that she has created a page turner that can't be put down!

I am a slow reader but I really tried to pace myself on this one -- I didn't want it to end.  I was almost as teary eyed as Tim and Cynthia as they headed for their next adventure.  I hope there is another book.  And I hope it is soon.
at January 15, 2011 2 comments:

Email ThisBlogThis!Share to TwitterShare to FacebookShare to Pinterest
Labels: In the Company of Others, Jan Karon
Newer Posts Older Posts Home
Subscribe to: Posts (Atom)