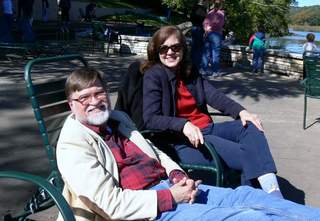 
This past week was horrible. Not the whole week -- just the latter half.  Up until Wednesday we were having a really great time getting ready for Christmas, putting up the village and having a babysitting day.  Wednesday was planned to get some Christmas sewing done and finish some decorating.  We were having a ball around here just relaxing with the gorgeous weather and getting into the swing of the season.

Then the call came.  It was around lunch time on Wednesday when my phone rang.  It was my daughter's best friend from San Antonio who now lives in Austin.  It was unusual for her to phone, we talk on the computer from time to time but she never calls.  She lives on Ave. G in Austin, two doors down from a little, independent church which was begun by my cousin thirty three years ago and which he still pastors.  She had met my cousin on a number of occasions, once when we were visiting her.  She called to give me bad news.  My cousin and his wife had been killed in a horrific accident outside of Austin on a highway that was undergoing construction.  I simply couldn't process what she was saying.  I have never felt such shock, it was like I had been slapped.  We are supposed to go visit this young woman and her new baby and I had been planning on taking my cousins to dinner.  I was planning.  What was she saying?  This just couldn't be.

After much internet searching I found news story after news story, photo after photo and video after video.  I watched them even though I knew I shouldn't.  I couldn't believe what I was seeing.  It was horrific and tragic and my cousin was gone.  I spent the rest of the day trying to get information.  I called his church and was told that I couldn't be a relative, he didn't have any relatives.  They were rude.  I was hurt.  I had to break the news to my aunt and her daughter -- it was so sad because he was to officiate the wedding of my cousins child in January.

I had a strange relationship with this cousin.  He was my father's first cousin, my second cousin, even though he was only three years older than I.  I know him even though we didn't talk on a regular basis.  I called on him many times for help and he was always there to help me.  I always looked at him as someone who would always be there for me  because he was always there for me.  I counted on him for strength and guidance on a number of occasions and I will really miss him. He was really a great guy.

I have been very sad but on Thursday, as I traveled to my daughter's house in the dark of morning, I could see his face and hear his voice telling me "we are fine (in the Texas drawl he had) -- don't be so sad -- just get on with it.  We are fine" and he was chuckling as the vision faded.  I know they are fine but it is really hard to not be sad.
at December 03, 2011 2 comments: