Catching Up and a Couple of Book Reviews


I am still playing catch up after my two week babysitting gig.  I did ok the first week but the second week found me a bit tired toward the end.  It would be fine if there wasn't so much getting up and down off the floor.  Now that Bean is pushing two, however, there isn't nearly as much lifting which is a blessing and considering that she is the independent sort, she does a lot for herself.  Aside from having the opportunity to spend time with Bean, the time I spend at her house does afford me a good amount of time to read which I really enjoy.  She still takes a good afternoon nap so I have at least two hours of uninterrupted time to get into a really good book.  I have  been able to finish or almost finish a couple of really good reads in a short amount of time -- for me -- this way.

The  first book I finished was The House at Tyneford by Natasha Solomons. 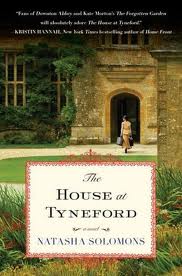 I discovered it when I did a search on Downton Abbey and several complementary books were recommended.  It is the story of a young Dutch Jewess who was shipped off to England at the beginning of World War Two to work as a domestic in a big house, even though she was somewhat aristocratic in her own right.  She was dispatched to Tyneford house where she learned all the ins and outs of British aristocracy.  She also learned of love, loss -- great loss, and of starting over again and having strong resolve.  This book was a page turner, I couldn't put it down and would recommend it to anyone.

The second book I have been reading, and am about to finish is The Forgotten Garden by Kate Morton. 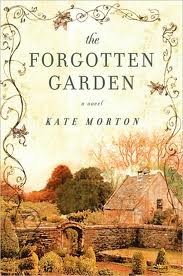 This book presents more of a challenge than the first.  It is longer and much more detailed as it presents the story of three interconnected women.  Each chapter is devoted to one of the three women's story and you have to pay close attention to the intertwining of these stories -- one from Victorian England, one from mid-twentieth century Australia and one from current Australia/England.  Through part of the beginning of the book, when so much historical foundation was being laid, I felt as if I should take notes!  However, as I am nearing the end of the book, it is all pulling together nicely, making sense, and making me sorry that the end is so near.  To make a complicated story shorter, it is about three abandonments, so to speak -- Eliza who was orphaned by death, Nell who was kidnapped, and Cassandra who was left with Grandma by a self-absorbed Mum who was needing to find herself and have fun while she was at it.  In addition to all these women being related that would be the common link.  It, too, is a page turner -- some of those turns going backward to re-read sections. I can't wait to get back to it today and finish is up although I am sure I am going to be sad when it is done.  I will probably have to seek out a copy of another Morton book -- The House at Riverton.  I am certain it will be as captivating. I would recommend  The Forgotten Garden hands down with one reservation -- it might make you want to create a magical secret garden -- I know it has made me want to work in my yard!

Another activity this week, unrelated to babysitting or reading, was Shrove Tuesday, Pancake Day, or Fat Tuesday -- whatever way you want to say it.  This was actually the first time we ever attended because, in the past, The Hubs was always at work at the time most of our church events begin but, clearly, this year was different.  So, we decided to join Bean and her folks  in the festivities.  The parish hall was decorated in the usual gold/green/purple and there were beads abounding -- all anybody had to do was grab them  off the table.  Bean looked lovely in green -- really went with the red hair.  There were literally piles and piles of pancakes and waffles, bacon  and sausage and bowls of fresh strawberries.  Whipped cream and maple syrup completed the buffet table along with milk, tea and water.  It was a feast, for sure, and none of us took a camera.  You would think that at my age I would realize that every day has its Kodak moments and carry a camera with me at all times!  I will work on that and in the meantime, I will see if I can "steal" one from the good Father Klein off the church website.

So, all of this coupled with beautiful spring weather (almost 80 a couple of days-- makes me fear for July) it has been a fantastic week with another just like it on the way!  I may get out and work in that garden yet -- I just need a gate!
at February 25, 2012 No comments: 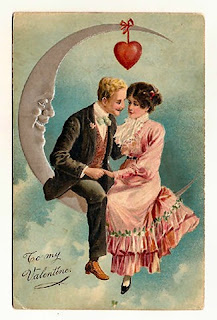 
My first exposure to quilting was when I was about four or five years old at the side of my great-grandmother.  I remember the evening well.  My mother and I were visiting her at her house on Edison Drive -- an old, white Victorian with a turnkey door bell which I loved, much to everybody's aggravation.  She was born in 1875 so she was close to 80 at this time.  We sat in her living room waiting for my dad to get off work and she and my grandmother were piecing a quilt top.  They weren't using a sewing machine -- although she did have a lovely treadle model -- they were using a needle and thread as they sat and rocked and talked.  The fabrics they used weren't  co-ordinated lines they purchased at their local quilt store -- they were scraps from sewing and old clothes.  They were making utility quilt tops to be put aside and quilted out when somebody said they needed some cover.  I was fascinated with the fabric and the process and even tried my hand at it that evening.  Although I didn't start quilting until much later, the fascination stayed with me as did my love of fabrics.  So, when I started quilting, I started with a sewing machine and modern tools although I did hand quilt my first quilt.  I love most of the process and the instant gratification of being able to get a quilt finished in as little as a weekend was certainly appealing.  A few years ago I purchased a fancy new quilting edition machine that has all the bells and whistles.  It is great but....it is in the laundry room so if I want to sew in the evening that means I am in the laundry room and Hubs is in front of the tv.  Not a good scenario so I decided to revisit the idea of hand piecing.

A year or so ago I decided I wanted to try some English paper piecing, a common pattern being Grandmother's Flower Garden.  I downloaded the page of paper templates from an online site and started cutting out hundreds of little hexagons and making little fabric hexies. 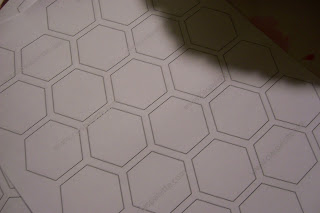 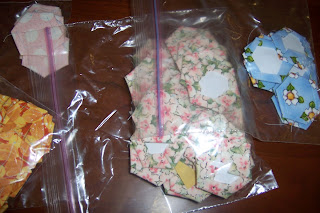 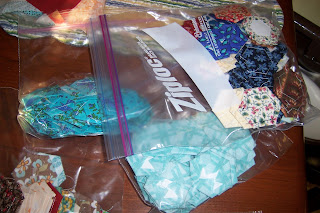 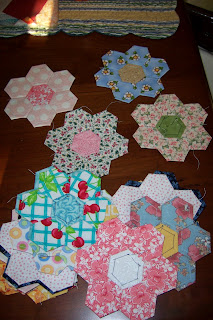 I sat down one evening and started sewing and couldn't believe how quickly you can make millions of these little things.  Then I decided I needed to see how easily they go together and I made a few of those (bottom photo).  I am going to applique them onto squares for a baby quilt after a get a few more.  I think they are so cute!

Of course, doing everything by machine these days is the way "it is done" but recently, however, I have noticed in the quilting magazines that there seems to be a trend toward handwork again so I decided to try it.  I wanted to buy the Marti Mitchell templates but I couldn't find them locally and they were pretty pricey so I opted for the Omnigrid 3" square template set which has a square, a half square triangle and a quarter square triangle template.  They are heavy acrylic with the seam allowance already included.  I also bought a quarter inch ruler to mark my sewing lines.  I put the whole thing aside for a week or so until the other night I decided to give it a go.  I fished around in one of my many drawers of fabric and found some pre-cuts that I wasn't in love with -- not sure why I bought them except to maybe have some experimental fabric -- you don't really want to experiment with quilt store fabric -- that stuff is like gold.  Anyway, I did a bit of marking with a plain ol' mechanical pencil, did a bit of cutting and a little bit of stitching and this is the result.  This may end up being my first real scrap quilt!

So, that is what I have been up to the last few days -- I even opted to do this rather than look at the snow last night! This is truly addictive and very relaxing.  I might never get a quilt finished but at least it is cheaper than therapy!
at February 13, 2012 5 comments:

Email ThisBlogThis!Share to TwitterShare to FacebookShare to Pinterest
Labels: quilting


Hi, folks! No, I am not gone -- I just have a week long babysitting gig.  And you know, there are some things you get too old for.  I have been in bed, out like a light, at 9:30 every night since last week!  Oh well, it feels good.  Dinner out -- who knew there were so many plant based choices in restaurants -- and home to a warm bed -- nothing to complain about there!

Speaking of plant based -- going well, it is.  I did eat a little meat over the weekend and, oddly, it didn't even taste good so I didn't end up on one of those craving binges.  I haven't craved sweets either so it is working for me.  I have dropped about 5 pounds, or maybe 6 which is a great  added  benefit.  The only thing is, my already low blood pressure is even lower now which I am not sure is so great but I feel ok so I am just going to watch it.