And this one time -- in Home Ec

Many years ago, in about 1963, I took Home Ec at Mark Twain Junior High School in San Antonio, Texas.  It was not a happy  time for anybody.  The classes were divided up and for one semester we took cooking and the other semester we took sewing.

The "kitchen" class room was really sort of cute  -- very 1940's with four "kitchens",  each with a sink, cabinets, chrome tables with four chairs and a stove.  There was a professional refrigerator for use by everybody.  Each "kitchen" had dishes and supplies.  Sounds like fun, right?  For me, not so much.  We had four kitchen mates and we would rotate duties on a weekly basis.  I was fine with everything except lighting the oven.  It was a gas oven that I am sure was there when my mother attended the same school.  I would almost have anxiety attacks when I had to light the thing, with a match, so I made a deal with my friend Anne that she would light the stove when it was my turn and I would do whatever she was scheduled for.  As a result, I grew up really disliking cooking.  The teacher was a hoot, though, and she was also there when my mother was there, right along with the stove -- but that is another blog!

You  probably can't imagine anything worse than 16 weeks of misery in a kitchen you were afraid of but there was something worse -- the sewing room.  I didn't know much about sewing except what I learned watching my mother sew but I did recognize that the machines were old -- probably purchased when the stoves were -- and that the little, pleasant looking teacher was really a  SewingNazi! We actually had to sew real clothes -- a blouse and a skirt.  There was a pattern for the blouse that we bought from the teacher and the skirt was a gathered skirt that we just took measurements and sewed.  I got through the blouse ok and we started on the skirt.  Mine was made from some lovely yellow polished cotton fabric with white polka dots. I did a miserable job. The teacher got so mad at me she ripped it up, threw it at me and told me to take it home and do it over.  My mother wasn't happy, to say the least.  I won't repeat what she said but I remember it well -- let's just say that my little Mama turned into the MotherNazi.  She remade the skirt, sent it back to school with me along with a message and the teacher never said so much as "boo" to me ever again.  And, for years, that ended any desire I had to sew anything -- at all.

Then there was geometry.  Let it just suffice to say I am mathematically dysfunctional so I chose to take plane geometry during summer school.  I thought it would be better to ruin half a summer than a whole school year and I was right.  The good thing was I got to see one of my best friends from 9th grade, Delphine, who went on to a different high school.  The bad thing was we all had to take gamma globulin because Lois had mononucleosis! I got through it but I am not sure how.

So, where is all this back story going?  Well, you wouldn't expect me to pour over cooking magazines, collect cookbooks or quilt, right?  Well, I do.  Anybody who has read this blog for a while knows that I have been quilting for years and have figured out ways to deal with all that geometry.  I spent a long time sewing clothes for myself after  high school -- I liked making dresses and skirts on occasion and I really enjoyed sewing  clothes for my kids and oddly, I sewed more for my son than my daughter! However, I always had an interest in quilting and finally gave up garment sewing for quilting.  I have done a lot of it but now I have had the opportunity to do a bit of sewing for my granddaughter.

I have been away from my blog for the last few weeks sewing a couple of things for the Bean.  Not having bought a children's pattern in YEARS, I had to try a couple of things before I got it right but I finally hit on the correct size and managed to produce a reasonable Easter dress for our baby Bean.  My daughter is very, VERY picky and very, VERY preppy -- her middle name should have been Lilly Pulitzer! So, I was really pleased, and relieved, when she thought the dress was perfect.  So, here it is! 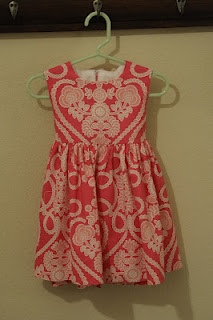 And here is the sweet Bean modeling it! 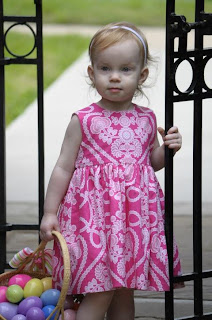 This was taken right after the Easter egg hunt at church yesterday -- she made quite a haul and even shared with a friend!


Oh, and about the stoves.  About ten years after the disaster sewing/cooking year, I was working as an administrative secretary for the school district that I attended school in.  Late one afternoon we got a call that there was a fire at Twain -- one of the stoves had exploded.  This didn't surprise me.  Not one bit.