A Week of the Blah's

Have you ever had one of those?  Nothing is wrong but nothing is right, either.  I had so many things to do -- ironing comes to mind (and goes right back out again) as does meal planning.  However, I spent the entire week doing nothing -- and I mean nothing -- but surfing the internet and checking in on Facebook.  How pathetic is that.

I am blaming it on the heat.

It is unbearably hot here and, even though the air conditioning is keeping the house comfortable, if you have to get out for anything it is really bad and saps the very life out of you -- you can almost hear a big sucking noise as every ounce of moisture leaves your body!

We went to a family reunion on Saturday in the miniscule town (is it even a town?) -- community- of Elk, Texas.  There isn't much in Elk, Texas but it's claim to fame is that it is the home of the whole David Koresh and Branch Davidian saga of 1991.  The church, St. Joseph's Catholic Church, where we have this biennial reunion, was the parking spot for all the military equipment brought in to deal with the "situation".  There is a plaque.  The reunion is always nice -- my husband's family was, at one time, quite large -- a grandma and grandpa and twelve children who married and had their own children and so on and so forth.  The family didn't start hosting these get togethers until after Grandma's death -- I think this was the twelfth one.  So, we have seen huge groups of  my mother-in-law's sisters and brothers, all of their children (and there are many) and THEIR children.  In the 90's there were so many kids you couldn't keep up with who was who.  Then something happened.  As my mother-in-law's generation just kept on going, we were losing their children and even two of the little children.   Once this was a large Czech family living in a large Czech farming community but, as the years have gone on the younger generation has married outside the community and moved to the cities -- given up farming and taking jobs in science, accounting and education.  Their children have grown up never knowing much about this little town with the one Catholic church which was the center of all activity -- along with the SPJST dance hall!  It was such a contrast this year -- three sisters -- Marguerite, Olene, and Dorothy -- two sisters-in-law -- Rosalie and Rose all sitting in a little huddle talking about old times.  Rose, age 98 had driven herself which was probably not a good idea.  Olene, 93, has really rebounded from several years of being "under the weather" and was more robust than I had seen her in years.  Dorothy hasn't changed much over the years, her childhood polio coming back on her as time goes on.  Rosalie is recovering from a limb loss due to some inherited illness -- don't know what it is.  There they sat -- all these women, much shorter than they used to be, all sporting walkers of various colors -- except for Rose who stood straight and tall.  One brother remains -- Theodore, who stood tall and thin and could remember everything about the dances and barbecues at the SPJST lodge -- they were all tripping down memory lane over photos that Carolyn had had copied for everyone of the old "homeplace" as they are fond of calling the family farm.  They are lucky -- yes, they are old but they are here and sharp enough to be  able to look at those  photos and remember -- not everybody's family is that lucky.  Now, their stories don't always match up, mind you, but then there is the good natured arguing over who is right! Great fun to watch and in doing so you realize how blessed this family has been.  It was a sparse gathering, however, not many of our generation were there and the only little children were my three grandchildren -- Nathan, Kathryn and Caroline and my great-nephew, Dante.

There are photos of my other two grandchildren but their parents prefer that their photos are not published on the internet.


So, after we made it there and back in one piece, I spent yesterday in an exhausted heap in my chair surfing the net.  I was looking at these -- 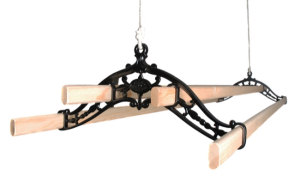 I think these are so cool and would look great in my house.  I have very high ceilings and this would take  up no floor space and my clothes would dry really quickly in my warm laundry room close to the ceiling.  I even saw, on one website, one of these installed over the bathtub.  Very nice! I think I might be getting one of these --- maybe.

Then, I was looking around at Hulu and discovered a new Britcom with Tom Hollander called "Rev".  I would love to see this show but it is only available on Hulu and I am not one to watch tv on the computer.  I was looking to see if I could buy the DVD's -- yes, but they are only in the British format.  Well, darn.  So, I went looking to see if I could access Hulu through my Wii.  No, only through Playstation.  Well, darn.  So, I found that I could get the show through Amazon instant video -- I could buy the whole series! Could I get that through my Wii?  No, only through Roku and Playstation.  Well, darn.  So, I started researching these -- 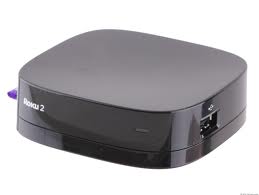 They are affordable and small and you can get a lot of stuff by using this but...wouldn't it just be easier to watch the show on the computer?  I am beginning to think so.

It was a good weekend for mail order, as well.  I had ordered these two sampler patterns from The Sampler Girl and they arrived.  My original order was the Diamond Jubilee sampler but there was a mix up in the order and the lovely lady at The Sampler Girl told me to choose an additional pattern for all my trouble.  I assured her that it was no trouble, "stuff" happens and that she didn't need to make it up to me but she did and I received the Kate and William sampler as well.  This is why I love dealing with my small business contacts and bloggy friends businesses -- they are just wonderful people.  So, now I am the proud owner of --- 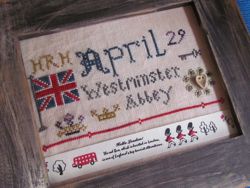 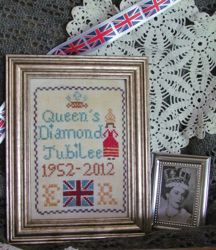 I also have this one to work on which I bought in honor of my family -- being a Davis and Welsh and all.  I would love  to change the colors as I am not a pink/green sort of person but I will see. 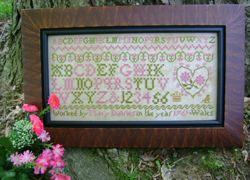 As I am  "off" quilting at the moment and the baby doesn't need any new clothes right yet, I am going to really enjoy stitching these little lovelies and I am going to use my new Carolina linen aida for them.  Hopefully I will remember to take photos of my progress.

I have also been reading "East End Jubilee" which I am enjoying a LOT.  It is a real guilty pleasure.  I also have been reading "Anthem" by Ayn Rand which my daughter is going to read as I believe it is taught in the English classes that she will be teaching this year.  It is a bit depressing and a little like "A Handmaid's Tale".  It is short and a quick read but more than a little creepy.  If I was reading this as a high school freshman, I would be very depressed!  But, hey, I have  never read any of Rand's work so it is enlightening.