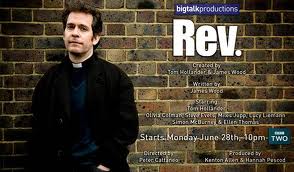 I was doing a little research on Hulu.com, never having paid much attention to it I wasn't really sure of what was available for my viewing pleasure.  I am pretty particular about what movies and television shows I watch so I didn't want to subscribe to a service that is not going to give me enough bang for my buck -- I already have cable that does THAT!  As it turns out, Hulu can be viewed over my little netbook for free or for an added fee, I can watch it on the television -- even though I can't.  In order to watch it on the television I would need a streaming device -- a video game player or something like Roku.  Well, I own a Wii but Hulu doesn't use Wii so that led me to look at the Roku which is again, another added fee.  I didn't want an added fee so, even though I would like the Hubs to watch with me, for now I am opting to just watch alone on my netbook.

While I was doing all this "research" and looking around, I discovered a new British comedy entitled "Rev." with Tom Hollander.  It is the story of a small village Church of England priest finding himself the rector of a large, run down, inner - city church in London.  It is comedic, but not in the "Vicar of Dibley" way, perhaps running more to the "Soul Man" (US tv, late 1990's, Dan Akyroyd) format.  In any event, I watched two episodes with netbook on lap and headphones in ears and after about a few minutes, didn't even realize I was watching a computer so I think this can work for me without any other fees or equipment.  The only annoying thing was the commercials but I would have those on regular television, now, wouldn't I, so not a real problem.

I think Tom Hollander is one of my favorite contemporary British actors.  I have seen him in more things than I can remember, the first being "The Very Thought of You" with Joseph Fiennes, Monica Potter and Rufus Sewell.  He is so  versatile in his roles as is evidenced by the contrast of his character, Daniel, in "The Very Thought of You" and his performance as the affable priest, Adam, in "Rev.".  If I wasn't old enough to be his mother I might actually swoon a bit.

So, if you are in the mood for something of this nature I would recommend "Rev.".  It is funny, it is serious, it is timely (especially for those of us of the Anglican persuasion), the scenery is interesting and the cast top notch.  There  are only six episodes in the first season with the second season to be available in November.  It is only available on Hulu, in the US.  It can't be purchased on DVD in the US or viewed in any other venue.  I watched two episodes last night and I am sure I will probably watch the rest tonight.

So, there you go -- something new and different and completely enjoyable!