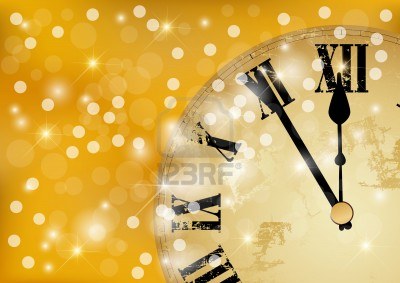 Happy New Year to all who might happen by here.  I no longer stay up until midnight to see the new year in so I am doing my well-wishing now.  I hope 2013 brings all of you good health and much happiness -- if you have those two things you have everything!

I am not sure why the idea of a new year is so intriguing -- seriously, I don't expect tomorrow to be vastly different than today but the new year is like a new beginning, a chance to start over, to right wrongs, to ....buy new towels at the January white sales!

I don't do resolutions anymore.  I never keep them and they usually involve sweets and soda and weight loss and, by now, we know that isn't going to happen.  I am usually breaking the resolution as I write it down!  This year I am just thinking in terms of doing things better, being more focused in the things I do, trying to make my little part of the world a better place.  I am also thinking a good deal about how I spend my time.  Over the last several months I have been thinking about being more discerning about doing things I really want to do and not what the world thinks I should do.  These thoughts have also lead me to think about who I am and how I am and how I am fortunate to have gotten to the point that I can pretty much be comfortable with who I am and not feel like I have to meet some sort of society driven expectation of what I should be.  Isn't it a shame that we have to wait until we are old to be happy in our own skin.  I guess that falls under the heading "20-20 Hindsight".  Ah, well, I look forward to the next year being one of contentment.

I have spent a good deal of time in 2012 researching minimalist living and frugal living.  This all began with our rather abrupt retirement a year and a half ago.  I wasn't prepared emotionally for the changes in our life and, as things like this usually do, I was sent into a tail spin.  We made quite a few changes to our life style -- some good that we retained and some not so good that we discarded.

One of these best things we did this year was change our cell phone plan.  We are not "smart phone" people -- I even went back to a basic flip phone -- so when our children decided to go out on their own we decided to give up our "family plan" and opt for pay as your go plans.  Hubs has 1000 minutes that he can keep for up to a year -- whatever is left over can be rolled over as long as he adds to the plan before the 1000 minutes is used.  He isn't a phone user so it will take him a long time to use that 1000 minutes.  His plan is $100 which isn't bad considering his minutes will last him quite a while.  My plan is $30 a month for 1500 minutes and a small amount of data.  It is more than I need and I have it set up to be renewed each month by credit card.  The minutes don't roll over on this plan, however.  All in all, though, we have saved over $100 a month on our cell phone bill which I thought was pretty good.  My next goal is to dissect the cable bill -- I see a Roku in our future.

I still line dry some of our laundry and I still prefer to make my own laundry soap.  I cut my hair into a minimal care "pixie" because of the health of my hair and, as a result, I find I am saving money on product and time spent on messing with my hair.  My hair is looking much better as well even if a "pixie" isn't the most flattering style on me.  Neither is bald so I needed to pick one -- I think I made the right choice.

I have turned off the tv more which has resulted in less electricity spent, less aggravation over the news and more peace -- I have learned to love, even crave, a home that isn't polluted by sound.  Of course, turning off the tv has aided my ability to read much, much more.  I have also learned to enjoy some programming on my computer on sites like Hulu.  That enables me to really choose what I want to watch, not sit zombie-like at a lineup that somebody  else has decided for me.  My, I am becoming a cantankerous old broad, aren't I?

All in all 2013 was a good year.  No major illnesses, minimal family drama, a good deal of time spent just watching the miracle of a child grow (there is nothing like it), waking up realizing that I had survived the retirement and relishing in the fact that we, in fact,  woke up, we are healthy and we are thankful to God for all the blessings, big and small,  that he has bestowed on us.

My plans for 2013 include much the same with more time spent watching, enjoying, "smelling the roses" so to speak, praying, loving and being grateful.