The last couple of weeks have been good reading weeks for me.  The books I completed were completely different in nature but they were both quick reads and page turners for different reasons.

The first book is "The Quilter's Apprentice" by Jennifer Chiaverini.  This book was a gift from my daughter and, let's just say she knows me  well.  While I have heard of Chiaverini through quilting sources, I had not read her books and I have to say that I was definitely missing out.  The book is about two young people, Sarah and Matt McClure, making a new start  in a new place -- a small college town in Pennsylvania.  Matt is a landscape architect and has landed a job at Elm Creek Manor, the family home of aging Sylvia Compson.  Sarah, looking for a change in career and unable to make any acceptable connections, accepted a position as personal assistant to the testy Mrs. Compson -- her job being to help Mrs. C prep the manor for sale.  Without saying too much, let me just assure you that there are relationships formed, relationships mended, realizations, new starts for everyone all around and a very happy ending.  This is a feel good book.  There are conflicts but not horrible conflicts.  There is sadness but not so sad that there is no comfort.  For a quilter, this book is a little bit of heaven.  I mean, what is not to love about a small, picturesque town with a quaint quilt store.  As I read along I caught myself doing the rocking stitch in the air -- I guess once it is part of you, you never really quit.  It really made me want to try to do some hand quilting again, I will just have to go slow so the hands don't hurt so much.  I can hardly wait to start the next book in the series.  Thank you, daughter! 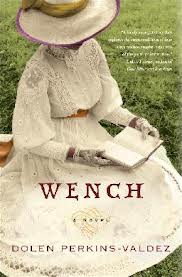 The second book I read was "Wench" by Dolen Perkins-Valdez.  This is a work of fiction based on a real place -- the Tawawa Resort in Xenia, Ohio. The resort opened in 1852 and closed in 1855 due to declining business resulting from  the displeasure of the  northern white patrons with the southern white patrons and their slave entourages.  The property changed hands and became the Ohio African University in 1856.  Enrollment decreased during the Civil War and the university eventually closed. in 1863 the property was purchased by the African Methodist Episcopal Church and became Wilberforce University which continues to be the nation's oldest African University.  It is believed that many of the first students were the children of the slave women and their white owners.

As I said previously, this is a work of fiction detailing the summer vacations of four slave mistresses and their white masters.  The strength of this book, in my opinion, is the characterization.  When this book first caught my eye I shied away from it because of the subject matter.  I couldn't imagine a book about slavery being "entertaining" and I certainly wouldn't use that word to describe this book.  As I began, I felt bad reading about these women in their deplorable situations -- some true slaves, some in love with their masters, some whose masters loved them -- but then I realized that these women wanted me to read about them, to "know" them, to see that these women were women like any other with the strength, knowledge and abilities to get them through -- just like all women of the ages.  One of the most compelling  themes is the need, desire and endurance of relationships between these women.  I am not talking about romantic relationships but rather the relationships that uphold us all through birth, death, joy, sorrow and loss.  Slaves were viewed as being pretty much inhuman and this book dispells that notion by showing how these women dealt with the "stuff" of life, how their strengths, frailties, and faith were no different than any woman -- then or now.

I was afraid that the graphic nature of this book would be more than  I could  handle.  I do read for pleasure and I couldn't imagine reading about cruelties toward these women being pleasurable and it wasn't but there was only enough of these scenes to move the story along-- it wasn't overdone for shock value.  It was a compelling book and these women drew me in.  I found myself thinking about how I would react in each of their situations and which one I identified with most.

With all of this said, it was a page turner, it was enlightening and it did have a happy ending -- a couple of them actually.

I would recommend this to anybody interested in history.  If you are looking for something light and airy -- pass this one by.