It seems as if my eclectic, mish mash of a blog is turning into a book blog.  I guess that is because that is what I am doing most of the time these days.  Besides, who blogs about laundry.  Yeah.

So, in the past couple of weeks I have enjoyed three books, one being an audio book.  While I am using the audiobooks to make my commute more pleasant, I am also trying to work through my personal library which has many more unread books than read books.  I am discovering that, while I always thought I had to keep every book that found its way across my threshold, I don't.  I have come across several that will be going to my local used bookstore even though I will probably only get about 30 cents for them.  Maybe I should just donate them to the library -- that sounds like a better thing to do.

The first book that I have added to my list on Goodreads is "Garden Spells" by Sarah Addison Allen. 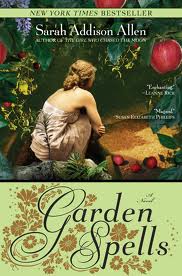 I have had this book on my shelves for a long time and is one of those that I purchased for the cover -- yes, I actually do that -- my bad.  At one point, last year,  I decided to alphabetize my shelves by author so this book was at the very top, sort of hidden.  When I decided to start at the beginning and just read my way through the shelves, this is where I started.  I am not too much of a fan of the paranormal because if it isn't done right it just becomes stupid (read "Bramwell Valley") and I didn't know what to expect of this work -- it could have gone either way in my opinion.  However, I was pleasantly surprised to find a bevy of great characters, a storyline that wasn't too bizarre and a happy ending.  The story centers around Clare, an attractive yet reclusive young woman.  Never feeling like she fit in she built a world around herself, allowing herself to live in the small town yet be apart from it.  Her sister, who left home at an early age, turns up on her front porch on day with a daughter in tow which was a surprise to Clare because she had no idea what her sister had been up to for the last ten years.  She soon found out as bits and pieces of her sister's life surfaced, along with a very angry, ex-almost-husband.  There is romance, drama, a bit of the mystical all woven into an entertaining story.  Like I said, it could have turned into a silly witch hunt but it didn't.  It progressed well and ended well.  Again, the paranormal genre is not my favorite but I did enjoy this book and would recommend it. 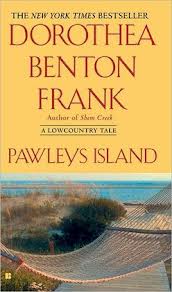 Pawleys Island is the second audio book I have listened to by Dorothea Benton Frank.  The first won my rave review because it was so excellently read, or rather performed, by Robin Miles.  This one didn't have the advantage of exemplary reading -- it was adequate but not the same experience -- but the book was very enjoyable anyway and I would recommend.  It centers around Rebecca Sims, her brute of a husband and their two children.  Rebecca has retreated to Pawleys Island after her abusive husband has soured her children against her, tried to declare her an unfit mother, taken her house and sued her for divorce.  Upon her arrival at her friend's condo, she obtains a job as a framer in Huey's art gallery and meets Abigail Thurmond, a ruthless divorce attorney trying to recover from the loss of her husband and only son.  As the book progresses Abigail and Rebecca become good friends, Abigail replaces Rebecca's hapless attorney and turns her husband every which way but loose, romances are rekindled, new ones started, children are returned home, new beginnings, etc, etc,.  It was good even though I am beginning to see Frank's books as being very formulaic.  This would make a good made-for-tv movie -- I see Judith Light as Abigail Thurmond and Philip Seymour Hoffman as Huey.  It would be very entertaining.  My next audiobook is another of hers, also read by Robin Miles, "Porch Lights".  I will review when I have listened to it. The final book for this review I just finished this morning -- "The Runaway Quilt" by Jennifer Chiaverini.  This is the fourth book in the Elm Creek Quilts series and deals with the question of quilts being used during the Civil War as signals in the Underground Railroad.  Of course, that isn't the whole of the story -- this tale delves into the background of Sylvia Compson's family -- the Bergstrom family.  Sylvia is the descendant of Hans and Anneke Bergstrom and the sole heir to their homestead Elm Creek Manor where she operates her quilt camps.  As a child she fell heir to a key that opened a hope chest belonging to her great-aunt Gerda Bergstrom.  The chest was somewhere in the attic and not thought  of until Sylvia was approached by a woman at a quilt lecture who was looking for help in identifying a quilt that she felt was connected to Sylvia -- possibly connecting the families. Key in hand, Sylvia searches for and finds the chest and begins to explore the contents -- three very worn quilts and a journal.   The quilts in the hope chest were a mystery that Sylvia hoped would be solved by the journal. After much genealogical research, the origin of the quilt in question was discovered and several questions raised by Gerda's journal were answered as well except for one --  is Sylvia Bergstrom really a Bergstrom at all.   This book is a great escape for quilters and genealogists (i.e. me) and it was so enjoyable I couldn't put it down and then regretted it being finished.  This is a definite recommend -- I might even read it again.