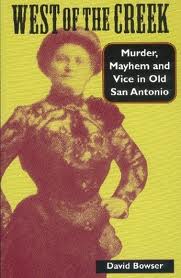 I have been participating in the 2013 Goodreads Reading Challenge, pledging to read 20 books.  I have met my goal but Goodreads will never know that because it won't let me add one of the books I have read! I have tried everything I know but it just won't get added to my "read" list.

The book is titled "West of the Creek:  Murder, Mayhem and Vice in Old San Antonio".  It is a small book with 35 stories about all sorts of scandalous activities in San Antonio from the early days until the 30's and 40's.  Now, I recognize that this isn't a book for everybody but being from San Antonio and doing lots of family research in the area, I found it to be a really interesting read.  I was curious because, when I worked downtown just south of Hemisfair Plaza, my mother was horrified that my place of business was actually in a section of what used to the the old "red light" district.  I laughed but one day I was there late, by myself until my husband could pick me up, and the neighborhood definitely took on another feel at dusk.  Ghosts, maybe?  Ha!

The book was very interesting when I looked at where events took place or where businesses were located and they were areas that I am familiar with and had no idea that shady things had once gone on there!

Anyway, this was my 20th book for my Goodreads 2013 Reading Challenge and I can't get it to post!  Grrrr!