Minimalism VS Prepper and How I Messed Up


We live in a new house -- built in 2005 -- but we don't live in a huge house.  We "downsized" to a garden home  - we have more square footage in our current home than we did in our former home but we have fewer rooms.  We have a "garden home" but we have a yard as large as our former yard -- fortunately we don't have to cut it ourselves as that is included in the HOA dues.  When we first moved here we only brought what we absolutely wanted and then took the next six years to empty the former house of our "stuff".  It was so nice, at first, to actually have empty drawers and space in the closets but somehow more "stuff" has crept into those spaces and now I am trying to sift through it and get rid of things.

A good deal of my problem stems from the fact that I sew. I  quilt, I sew and I do needlework -- all hobbies that generate lots of mess.  I don't have a room to do any of this in -- I sew in the laundry room and while everything fits, it doesn't allow for much clutter which seems to accumulate every where I go.

Because of this I have been doing a lot of reading about minimalism.  I have looked at lots of photos and read lots of blogs.  I have even referred back to one of our favorite books -- "The Not So Big House" by Sarah Susanka.  I have tried to employ the principals of minimalism -- if it isn't useful and you don't love it, toss it. That is difficult because I don't generally acquire things I don't like or aren't useful.  I have already gotten rid of almost every small appliance in this house and ALMOST went out and bought another rice cooker before I came to my senses. Another popular technique is to get rid of books and use an e-reader.  I have done some of that and I do enjoy reading some on the Nook but I still like books.  That creates another problem for me.  I have been known to go absolutely insane while standing at the sale table at our neighborhood B&N and buy books that I "might" read someday.  Well, I only have one bookcase dedicated to my own books and it is now double deep so I have taken some to my neighborhood Half Price Books.  However, I have been reading the Aunt Dimity series by Nancy Atherton and love, love, love the series.  I guess I had a weak moment while "minimalizing" my bookshelf and I took all my Aunt Dimity books to Half Price to sell.  Immediate regret!  So, I got online and bought them all back in hardback versions!  THAT is how I messed up!  However, I got ten hardback for $35 which wasn't a bad deal and I had earned half that from my paperbacks that I sold so I guess I didn't mess up completely! 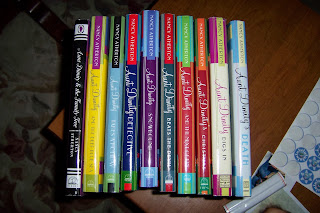 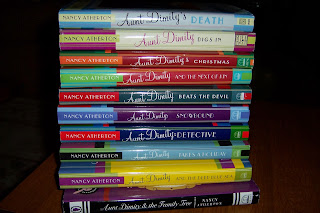 So, we have had a major ice storm here in DFW and I have been doing a lot of thinking about minimalism VS prepping.  I have always been one to prep for weather events because I have always lived someplace where we actually had weather events.  I don't worry too much about nuclear war and stuff like that but this ice storm -- quite another story.  So, I was thinking about how you could be a minimalist and a prepper at the same time and it dawned on me that you have to be minimalist thinking in order to be able to prep at all because if your house is full of clutter and stuff you don't use, you aren't going to have room to store the things you do need and be able to find the stuff when you need it -- like gloves for instance.  Yes, I know where my gloves are, thank you, but when fishing through the drawer for them it occurred to me that some organization was in order so, as soon as I can get out of here and go shopping, I intend to buy some organizers to get my stuff in order so I don't have to search for it.  Yes, I will probably have to get rid of some stuff -- like the half dozen socks with no mates -- and I will probably have to replace some stuff -- like the half dozen pairs of socks that are no longer pairs -- and I will probably have to do a good amount of rearranging because things are not stored very logically.  I do have to get the Vera Bradly purses out of the drawers and on the shelves which means I have to get rid of the purses that I don't use anymore into a box for Goodwill.

Ah, yes, so that is what I have been thinking about while being housebound and it looks like tomorrow is going to be a very busy day with all the drawer cleaning and all.