I finished the second book for my 2014 Goodreads Challenge -- The Christmas Candle by Max Lucado. 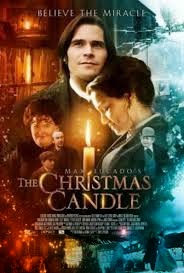 I had seen the book in B&N many times and saw the ads for the movie but never picked the book up nor did I see the movie at Christmas.  I wanted to but time just never allowed.

I was reading a post at Brandon's Notepad and his review of the book and the movie made me want to read it right away.  So, while still reading the post, I  downloaded the book and started reading immediately.  It is a short read but it is very good, very satisfying.  Although it is a bit predictable, that didn't take away from its charm or its message.  It takes place in a small English village with a cast of colorful characters welcoming a new minister following the death of the rector that had always been there.  The young man is pleasant enough and catches the eye of the local young women but he has a hard and bitter heart .  The townsfolk are perplexed that he refused to believe in the legend of the candle -- a time honored belief of the people that really brings hope to them.  However, as the Christmas season progresses, the young rector has a change of heart and, at the end ..... well, maybe you should read it for yourself.

There are things about the book that are a bit vague such as what denomination does the young minister belong to.  I believe him to be Church of England.  The reason I say this is the term "rector".  In Methodist churches the ministers are called Brother (at least ours was when I was growing up) and in Lutheran Churches they are called Pastor.  Also, because this is set in England I think it is a safe assumption to make.  There is not a lot said about the village itself but you can picture a small, English village with a bridge going across a small creek or river at the edge of town.  You know it is small because of the population and their interaction with each other.  There is enough said, however, so that you can form a mental picture.  The author adequately makes you feel the cold of the winter and the warmth of the indoors as well as the light of the candle and the presence of the angel.

And then there is the sub-story of Abigail.

This is a good little read -- a lot packed into a small book.  I don't generally re-read books but I think I will re-read this one around Christmas next year and I can't wait for the movie to come out next month.