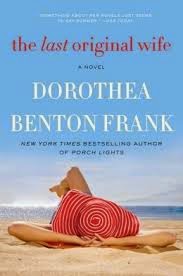 Ok, it has been pretty well documented that I gave up on "Past Imperfect" by Julian Fellowes. It was a hard breakup but it was me, not the book.  Once I got over the disappointment of really not connecting I picked up a book that I had bought a couple of months ago that was just calling my name every time I walked past it.  It proved to be a much better relationship.

"The Last Original Wife" by Dorothea Benton Frank was just the latest in the string of her books that I have been enjoying over the last couple of years.  The first one I enjoyed was "Folly Beach" which I listened to as an audio book.  I have read several others and feel that while Frank follows a definite formula when writing these books, they are still good reads and very satisfying.

"The Last Original Wife" was no different.  It was about a disgruntled (and rightly so) wife, a louse of a husband, a gay brother, two ungrateful kids, an old flame, a lot of money, big houses, and fancy cars.  It moved along quickly and there was a lot of action -- especially when it came to "the Barbies".  It was a fun read -- I learned to really dislike Wes from the beginning and I think my favorite character of all was Harlan, the brother.  Oh, and the ghost -- can't forget the ghost -- and the dogs.  Gotta love the dogs.

It was a great read and I was sorry to see it end.  On to the next one -- "The Hurricane Sisters".  Hopefully I can get to it before I pick up my copy of Jan Karon's new offering "Somewhere Safe With Somebody Good".  Hopefully my dry reading spell is over because there are a lot of really good things coming out.