It just hasn't been the same since the "accident".  "It" being my shoulder and the "accident" being awakened from a sound sleep with my arm over my head -- apparently all night -- and not being able to move it.  It was frozen in place.  It was painful.  It took a bit of time to get it mobile again and, as I said, it has never been the same.

After that I found that sleeping on my requisite two pillows, materials of unknown origin -- probably synthetic fluffy stuff - only aggravated my shoulder.  Now, I have always slept on two pillows due to allergy issues affecting my ears but that is another story entirely.

So, I went on a quest to find the perfect pillow.  It seems it would have to be something rather deep -- at least 6 inches to accommodate the shoulder and to deal with the stuffy-head problem.  It would need to stay firm and lofty.  I came home with yet another regular pillow with fluffy-stuff and Hubs came home with a Bucky Duo buckwheat/millet pillow.

He was happy as a clam because he feels a pillow should be no thicker than an envelope and me -- well, not so much.  The new fluffy-stuff pillow fell flat and the shoulder was getting stiffer and stiffer. I finally decided I would try the Bucky, went out and purchased one, came home and declared it another fail and it has sat in the closet for a couple of years now.

About three months ago when I realized the shoulder was now painful and not just stiff I decided something had to be done.  So, back out we went on another quest.  This time I came back with the Tempurpedic Cloud pillow. 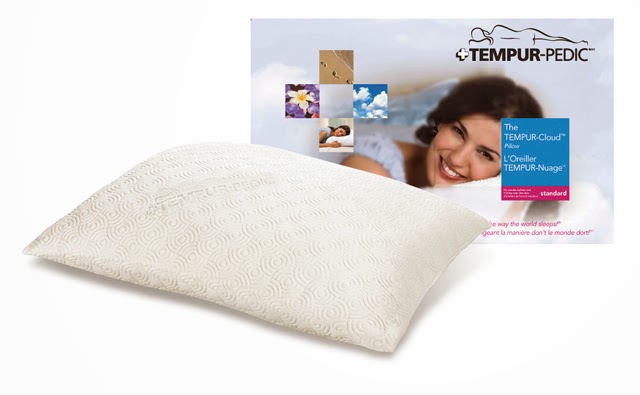 This was the ticket! The first night I fell sound asleep without having to adjust and readjust the fluffy-stuff.  I slept like a baby -- well, one without sleeping issues anyway.  It was perfect.  I was in LOVE.  I swore I would never go anywhere without my pillow -- it would travel with me, it would go on sleep-overs with Bean .  It would be my forever companion.

Daughter and son-in-law bought a new Tempurpedic bed.  Hubs and I were there for the delivery.  The delivery people unwrapped the lovely, white platform of indescribable comfort -- I know because I have had one for about ten years now.  The difference between their new mattress and mine, other than the "new" factor was the odor.  Stench is probably a better word but whatever you call it there was a definite chemical off-gassing that got worse with time.  By the end of the day we had the bedroom windows open and the door shut.  They called the mattress store and were told -- "oh yeah, they need to be aired for a couple of weeks before you can sleep on them".  Really?  So, daughter decided to do some research while she was waiting for the mattress to air and was shocked at the reports of the toxicity levels of the mattresses and the pillows. It didn't seem to affect the Tempurpedic brand alone -- all memory foam mattresses seem to have a level of toxicity.  The mattress was returned to the store much to the dismay of the sales staff -- they just couldn't understand why somebody would want to return something of such incredible comfort.  Clearly they never read any research on their products.


I don't remember any odor with my pillow but then, my sense of smell is greatly compromised so I might have missed it but Hubs didn't mention it.  However, I decided to err on the side of caution as I am very chemically aware these days and I took the pillow back.  Minor miracle -- I found the receipt.

Then, yes, the quest began again and I came home with a down-alternative variety pillow.  It said on the packaging that it "sleeps like down and acts like down".  Well, it does but I don't know what snapped in my brain but -- I don't like down pillows.  Another fail but it is a well made pillow and it should be because I paid enough to buy a whole gaggle of alternative ducks!

Ok, by this time I am getting a bit fed up with the quest -- my attention span is only so long, you know and all those white bags of fluff, fake fluff, foam -- toxic or otherwise were all beginning to look alike and I was beginning to wonder if maybe the Japanese were smart to just sleep on a block of wood.  Chemically untreated block of wood, of course.

So, I decided to channel my inner hippie and give the Bucky Duo another try. 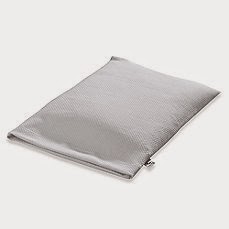 Now this pillow is double chambered -- one containing buckwheat hulls and the other containing millet.  It is literally a bag of birdseed.  It comes with a lovely, soft covering that can be removed for laundering.  I finally took the plunge and slept on it for one night and I couldn't believe it!  It was absolutely delightful -- well, almost delightful.  The first night was an exercise in re-adjusting the pillow every time I turned over which is a lot.  The second night it was better.  I was sleeping without a regular pillowcase so I added that and the cozy meter went up several notches.  By the third night I didn't notice the rustling of the hulls anymore.  I finally put on my silk pillow case which helps the frizzy, out of control curls and it has now become just as good as the tempurpedic pillow and it doesn't feel flat at all!  I can sleep on my back, which I don't much, but it feels good and on my sides all I have to do is punch it up a bit and I am elevated to an acceptable height.  The shoulder isn't hurting, my stuffiness isn't any worse and I feel so -- sustainable!

Who knew that sleeping on a bag of birdseed could do that for you! Of course, in the early days I decided to try stacking my husbands pillow and mine to see if I could get the height and it worked out well so I ordered another.  However, Bed Bath and Beyond has been so slow in filling the order that I have become so comfortable with the single pillow and I wonder if I jumped the gun on ordering a second pillow -- I really don't need it -- but it will come in handy for extra hulls if we need them.

So, the lessons learned here?  Always, always, always research products you are going to purchase that could affect your health -- that seems to be everything these days.  Keep an open mind to truly alternative ideas and never underestimate the power of the birdseed.  Also, one last thing -- it is ok to come out of the hippie closet -- even at my age.  Now I even have the hair for it -- long and wild.