When I was growing up I lived across the street from my cousin, JLSHall.  We lived in what was the boom of post-war housing.  We lived in small houses that now fit into the "tiny house" spectrum, all being in the 950-1100 sq. ft. range. 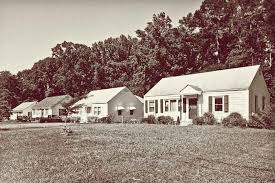 The houses in the photo above are not of my street but it could be.  The house on the far right looks amazingly like the house I grew up in -- white asbestos shingles, royal blue shutters, the same sort of small front porch but the roof was dark blue.  It sort of makes me homesick to look at this photo. My aunt's house was across the street and the color scheme was green.

These houses were built with returning soldiers in mind and with the idea that there would be huge booms in the economy and retail and manufacturing and there was.  These houses were full of families -- kids in almost each and every one.  However, I assume the builders knew that the houses would be too small for very large families so they placed them on very large lots with room to expand.

We didn't expand and neither did my aunt and uncle.  My uncle however did build a rather large pigeon coop toward the back of the lot up against a patio that he put in the middle of the yard.  He had lots of pigeons and JLSHall and I loved to play in that coop much to our mother's dismay -- it wasn't all that tidy!  My uncle cleaned it out regularly but not as regularly as the pigeons messed it up.

It was great fun to be in that yard at dusk when he would whistle and the pigeons, with their little colored bands on their legs, would line up on the telephone wires and wait. 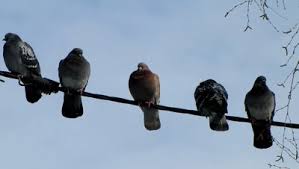 He would fill the feed, open the door and they would all go home to roost for the night.  I loved playing with the bands.  They were very colorful and fun to sort. 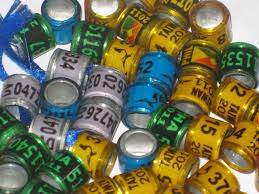 So, when I saw Pidge for the first time that is what I thought of -- those fun evenings watching Uncle Frank's pigeons.  So now, every morning I am on the lookout for Pidge -- and he is usually there.

I don't know much about pidgeons but my husband says it is odd that he is alone, they usually travel in pairs.  I don't know where his partner is, or his flock but I do know that I really enjoy looking out the door first thing and seeing him pecking around on the patio or sitting on the fence.  He makes me smile. 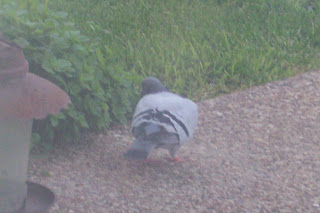 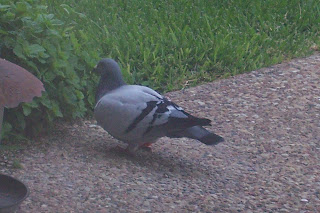