And Here's the Reason Why

I have been absent from this blog for a bit and here's the reason why.  I have been busy sewing.  I am still sewing but thought I would share a bit of what I have been doing.  This is ALL I have been doing, I haven't even been reading and that is something because that is my all-time favorite pastime.  So, here are a few of my creations  -- haha -- sounds like some sort of designer-speak and that I am truly NOT.  But anyway, here is what I have been doing for the last several weeks. 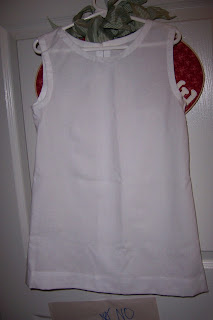 First off, I made a little slip for Bean.  You can't just go into Sears and buy 2 packs of little slips for little girls anymore (you can buy them online from Mennonite women who charge a lot of money for them).  So, rather than line the dresses, I decided to just create a little slip.  I used a really soft cotton/poly batiste for this -- the same thing I have used to line dresses before and it worked well.  I just adjusted the dress pattern -- lowered the neckline, enlarged the armholes a bit , and shortened it enough to be shorter than the dress (no draggy petticoats here!) and voila -- a slip.  I bound the neck and armholes with single fold bias tape and made a placket in the back with a button on it.  Unfortunately I didn't have any cute little white buttons  so it is closed with a hot pink heart shaped button that I didn't take a picture of because I will probably replace it at some point. 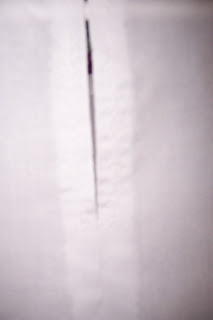 Sorry for the lousy photo quality but I did do a bit of decorative stitching down the sides of the placket -- the first and only time I have used the deco stitches on my machine.  I am such a trend setter. 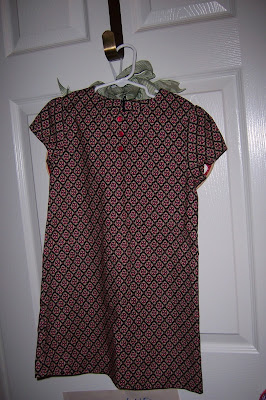 Here is the dress.  It looks a bit like a gunny sack here but Bean really likes little a-line dresses.  This pattern went together like a dream -- probably the first time in all my years of sewing that THAT happened.  It is a cute little medallion print with some little buttons.  I would have put more detail on it but my daughter is very much the minimalist so I am keeping things simple.  It fits her really well and now that the weather has cooled so much she will have to wear a sweater with it.  There is a long sleeve option which I might use if I make more. 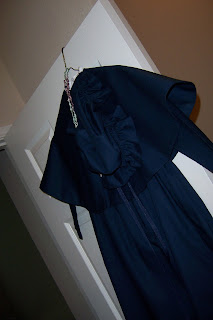 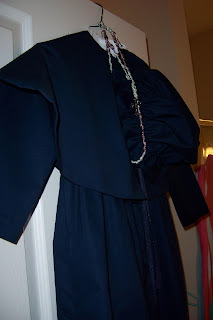 And last, for definitely not least, here is our little "saint" costume.  You can't see the detail but that dress has a sweetheart waistline.  What a pain!  I had to alter a pilgrim collar to create the cape but the mop cap pattern worked great for the hat.

And, without further adieu--- 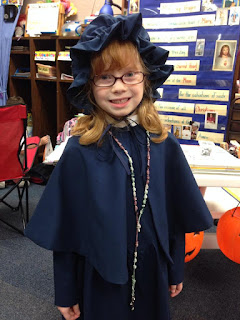 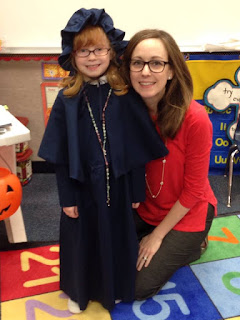 Meet our version of St. Elizabeth Ann Seton -- an American saint who lived during Revolutionary War years, was an Episcopalian, married with four children.  She was introduced to Catholicism in Italy after the death of her husband.  She lost two of her four children and went on to become a nun, form an order of sisters, start several schools and was sainted in 1979.

Bean is very inappropriately wearing one of my hand tied rosaries around her neck but it wasn't long enough to tie around her waist so, they improvised.

That cutie in the coral shirt is MY baby!

So, folks, that is what has been going on here.  Who knew that creating three little things could so totally destroy a house, make a mess that has taken me days to straighten up and robbed of me of my reading guilty pleasure.

On to the next project.