I have been doing very well with my new "non-meal planning" approach to our dinners.  It has been very relaxing and unhurried. I bought enough ingredients at my last grocery shopping to allow me some flexibility.  The meals have been simple and I have somehow been able to get past making enough food for a small army and just have dinner for two.

The crockpot is slowly becoming my friend.  One of my favorite things to make in it is taco meat.  I have decided that I need to adjust my seasonings though because cooking it as long as I do, the spices become a little more intense than I think we need especially if we intend to use salsa. 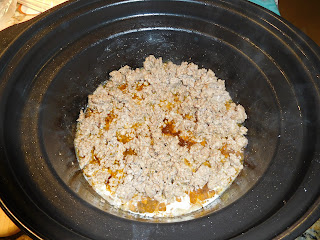 Speaking of salsa, we recently found this at our neighborhood Sprouts and definitely recommend it. 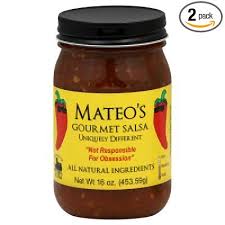 Last night we had spaghetti with caeser salad and garlic bread.  I had enough spaghetti and sauce left to make two small portions for lunch today.  I surprised myself when I actually thought ahead to do that. Thinking ahead is not my strong suit, especially where food is concerned.

Tonight was supposed to be pizza night and it was but not without drama.  Hubs is the one who is the pizzameister.  He is quite good at it but he is quite busy today with a Sunday School project.  So, I decided to take on the task.  Since Hubs couldn't tell me what his dough recipe is I looked up one on Pinterest.  It went together well although I thought it was awfully sticky.  However, this is what it looked like for the second rise. 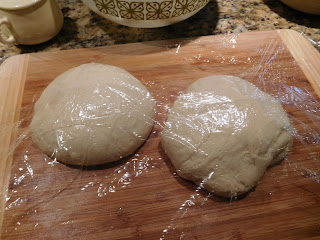 I chopped up our favorite vegetables for pizza -- basil, black olives and mushrooms -- and there was pepperoni, too. 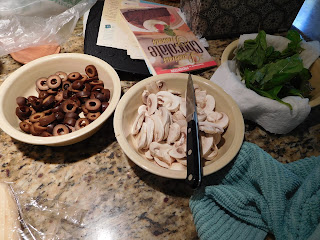 I opened the Pomi tomatoes only to discover that I bought the wrong thing -- I needed peeled tomatoes, not strained tomatoes.  Oh well, I will just have to improvise, I thought. And I did. 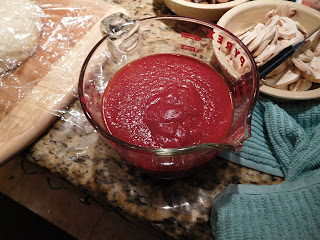 Then I pulled out the peel, sprinkled the cornmeal on it  and set about patting out the dough.  I decorated it with the vegetables and cheese and it looked like a work of art! And then, it happened.  Yes, the drama.

The pizza stone had been heating and was just waiting for the sizzle of that dough and .....I couldn't get it off the peel.  I tried three times and each time a little bit of it fell into the oven.  I finally tried to put it on a pan and the whole thing just collapsed.  Hubs walked in asking "how is it going" just in time to see me throw the whole mess in the trash.

It was a good thing there was a second one.  This time I put it on a pan -- I didn't have any more fresh basil so I had to use dry.  I put it in the oven and this was the final result. 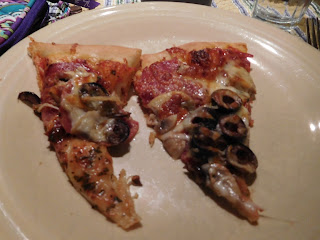 It tasted ok, it was better than frozen but the second one wasn't nearly as gorgeous as the first one.  I was pretty miffed and said I just didn't understand why I couldn't get it off the peel and it was then that Hubs said I couldn't pat it out on the peel - I had to roll it out on a floured cutting board and then transfer it to the cornmeal covered peel and then it would slide off.  Well, who knew.

For a moment I was quite deflated but it tasted it ok, the dough was ok -- not thick (I don't like thick) and not so thin as to be crispy.  So, after some thought I decided that we would have pizza again next Saturday night and I would try again.  I will not be done in by pizza dough!

However, Hubs doesn't have to worry about losing his title of Pizzameister any time soon!
at January 23, 2016 2 comments: