As I said last week, I am following Jenn at A Daily Rhythm adailyrhythm.com as she begins a simple living challenge of her own devise.  The goal of her plan is to designate areas of her life that she wishes to improve on or develop.  I had been thinking along the same lines so I decided to join her in her journey.  Her plan is to post every Saturday about her progress and I am following suit so here I am with my progress of the last week.

I chose to concentrate on six main concerns of mine in order of importance to me:  spirituality, exercise, peace, food, domestic issues, and grocery shopping.  My least favorite thing in the whole world is grocery shopping so you can see where it ended up on my list of importance.  LOL!

The Word -- this is the most important goal to me and I managed to meet it each day although it wasn't always first thing in the morning.  Most days it was as I sat in the pick up line at Bean's school.  I have started with Genesis and put a NIV study Bible on my Nook which makes the toting around a lot easier.  The reading is slow because I am trying not to just skim over the difficult names and such, I am really trying to stay focused.  However, I am on Chapter 34 so progress is being made.

Exercise -- ok, my goal was 30 minutes a day on my exercise bike and I have accomplished that 5 out of the seven days.  With that said, I am also incorporating some pilates that I used to do in college and I am finding myself doing some of that while I am waiting for the tea water to boil or the washer to stop.  It is doing wonders for the achy knees, btw -- I wish I had started this a long time ago.

Peace -- the tv has been off the entire week until noon when we watch the news and a soap opera.  Then it goes off again until late evening and I notice it has been coming on later and later.  We only watch two shows regularly and we seem to be liking the quiet.  So, I would say I have accomplished that goal. Plus, I have gotten really tired of the politics.

Food -- ok, I bought the two books that Jenn recommended -- "Thin Within" and "Intuitive Eating".  I think I have read them both in the past but need to read them again.  I haven't started yet but will probably get to that today.  As far as my eating went -- well -- improvement needs to be made.  I did ok for the most part being mindful of what I was eating and when I was eating.  I didn't snack a whole lot but there was some.  However, it wasn't mindless, it was intentional.  The thing I can't get past is sugar and that is what I desperately need to conquer.  So, this upcoming week I am going to do a better job of being cognisant of the sugar intake.  I really don't want to go back to food journaling but I will if I have to, just to get my head around things.

Domestic Issues -- ok, now things start to slide a bit.  I am behind on the laundry but catching up this morning.  I haven't done a lick of housework except to try to keep the kitchen clean and I have been doing a reasonable job of that.  My excuse?  Well, MIL was admitted to the hospital on Monday and then immediately released to a rehab and we have been doing a lot of running back and forth for that.  And, I had a doctor appointment as well.  Not a really good reason, I get it, but these things did mess up the flow of my day.

Grocery shopping -- I haven't done a good grocery shopping all week.  We have stopped for a few things along the way which was good -- we have a new Spouts just up the street and I love it -- so small, organic and great meat.  We eat out a lot which is bad but when we get home in the evening neither one of us really want to cook and we don't like the same foods so there you go.  I did cook my easy, simple steak dinner again and Hubs liked it.  I had put some potatoes to bake in the crock pot and then sauteed some asparagus as the steaks grilled on the stove.  I have been watching a lot of Jacques Pepin and love the way he makes cooking look so effortless.  I wish I could cook like him or....just hire him.  Ha!

So, that was my week of simple living.  I am going to continue on this path next week and try to get my head around the cooking a bit more.  I have a few simple meals up my sleeve (hint: tonight will probably be omelets or grilled cheese sandwiches).

Oh, yes, I almost forgot.  I ordered an Erin Condren planner -- having been sucked in by my daughter and cousin -- but I really do need to write things down.  I thought when we retired life would be one big, carefree, white fluffy cloud sort of floating existence. Boy, was I wrong.  You better have your wits well honed because before you know it here comes health issues, medicare, social security, supplementals, phone calls, notes scribbled on discarded envelopes -- yes, in other words -- something I like to call ElderChaos.  So, I decided to purchase the much recommended planner in an effort to keep all this retirement delight in some sort of order.  My husband usually handles this but lately they have been wanting to talk to me since most of the calls are about me and besides, he is the worst about the note taking so here I go -- acquainting myself with the geriatric equivalent of a college planner.  Yay!

Anyway, I thought I would share photos -- I didn't take any of the inside but let me assure you - it is roomy with lots of space to write and I am thinking it would be useful for meal planning as well if I actually resort to REALLY meal planning. I know it will be useful for keeping track of my exercise.


So, that was my Simple Living Challenge for this week.  Hopefully I will have more progress next week. 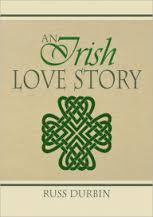 This is the story of Patrick and Maggie.  Patrick is an American businessman in Ireland on.. well.. business.  He is married with two children.  Maggie runs an inn and is unmarried. They meet, she isn't impressed with the "Yank", she becomes impressed, things progress.  Promises are made, Patrick goes home and promises are kept.  Things aren't the same and apparently haven't been for about a year, unbeknownst to him.  Twenty years pass.  History repeats itself.  Happiness is found.

Russ Durbin's writing is wonderful.  It seems to be written by a person with a business background -- a nod, I am sure, to the main male character.  The prose flows without flourish or grandeur.  It is very matter of fact.  However, rather than reading an account of the happenings, the reader feels like he/she is watching.  It is very good writing.

It isn't a long book -- a little less than 300 pages -- and it reads so smoothly and progresses so well that it goes way too fast.  This is one of those books that you wish there was a sequel but a sequel would actually spoil it.  It is perfect as it is.