Haint Blue Ceilings of the South

I am from the south but the Texas south -- not the deep American south like South Carolina and Georgia.  I have an accent - or so I have been told - but a Texas accent, not an American southern accent.  However, lots of my ancestors took the usual migration routes across the country from the New England area through the southern states to Texas.  Many of them lived in North Carolina and Alabama so I have an interest in the lifestyles of those areas.

Every area has its customs and traditions peculiar unto itself.  Obviously Texas has lots of cultural and historical customs and traditions which are completely ingrained in those of us who have lived here all our lives.  However, many areas have just as interesting and compelling backgrounds and one that I have been fascinated with, since I learned of it, is the blue porch ceilings of South Carolina and Georgia.

Many people paint their porch ceiling a shade of blue or blue green referred to as "haint blue".  "Haint" is the Gullah word for haunt or spirits.

Here is a definition of Gullah from Wikipedia:

Gullah (also called Sea Island Creole English and Geechee) is a creole language spoken by the Gullah people (also called "Geechees" within the community), an African-American population living on the Sea Islands and in the coastal regions of the American States of South Carolina, G

And here is an explanation of the painted porch tradition from the Sherwin Williams Paint website:

"Southerners, especially in the area of South Carolina, have a name for the ceiling paint used on porches – the soft blue-green is referred to as "Haint Blue." "Haints are restless spirits of the dead who, for whatever reason, have not moved on from their physical world," says Sawaya."

Now, I don't much believe in spirits that haven't moved on -- well, I do actually but I don't think any of them are living on my back patio.  However, what does live on my back patio are wasps, yellow jackets and mud daubers.  According to some, the blue ceilings will appear to be the sky to these little varmints and they will not want to build their nests in the corners of your patio or porch.  That was reason enough for me to do this -- 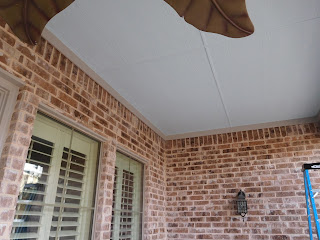 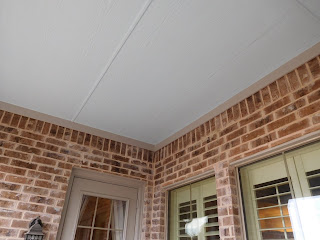 Since we were painting the house anyway thanks to the installation of the new gutters, I asked my husband to paint the ceiling of the patio blue.  He looked at me a little concerned about my mental well being but I told him the history which didn't make much of an impression but when I told him about deterring wasps and flying things, that shed a whole new light on it and voila! we have a blue ceiling.

It looks a bit washed out here in the early morning light but it is actually a very lovely, light turquoise blue.  It is very spa-like -- beachy actually.  It looks very relaxing from inside the house and I think it is going to be very relaxing during the summer and maybe we won't have so many flying beasts to contend with.  It is hard to maintain a relaxed summer atmosphere when you are armed with Raid to get rid of the wasps and yellow jackets -- we have mostly yellow jackets.

So, that is what we have been doing in this wonderful warm winter we are having.  It was 82 yesterday so the painting got finished, the ceiling is blue and we are quite pleased with the way it turned out.