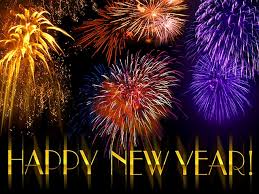 Yes, 2018 has arrived!  Hubs and I rang it in while binge watching Jurassic Park movies.  I would have preferred to watch something else but was too lazy to change the channel.  It's ok -- kept us awake to enjoy the New Year and listen to the thumpy, bumping of the fireworks outside which we didn't bother to get up and look at.  We were really having a lazy day yesterday!

I had started a new read a couple of days ago and had thought I could finish to add to my Goodreads 2017 Reading Challenge but I didn't quite get done.  I did finish it up this morning and thought I would share a review.

The book was Agatha Raisin and the Case of the Curious Curate. 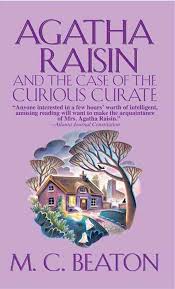 It was another in the Agatha Raisin series and was pretty much like all the others but I do enjoy these little books even if they are very formulaic.  I might even start another if I can find it on Overdrive for my Kindle.

I am really enjoying the library feature on my Kindle.  I love checking out books on it -- it makes me feel so resourceful!  I have a lot of books, too many actually, and I do like the idea of free instant gratification!

The new year has started off quietly for us.  We had ice yesterday and we stayed in since we are still marginally under the weather.  It was a gloomy day as the last few have been.  Today, however, the sun is shining and we are inching closer to a warm up later in the week.  I am ready.  I know, that sounds wimpy, but I  a South Texan -- living in North Texas -- and cold weather is just not in my realm of understanding.

The weather in South Texas is quiet different than North Texas but they have had snow twice down there in the last couple of weeks and I know how people react -- it isn't pretty.  Not much better up here either.  We just aren't built for it.  So, I will be glad to see it go.

We have had to put off Bean's First Communion twice.  She was supposed to take it on Christmas Eve which would have been a lovely thing.  We all had the flu.  Then she was supposed to take it yesterday, New Year's Eve, but we had ice that closed the highways down and her godmother has strep throat.  So, we are now looking at next Sunday -- her godfather will be serving so he will get to serve her which will be really nice.  Hopefully we are all back together again and the weather is supposed to be good-- in the 60's and I can certain do the 60's.  She has a lovely dress and I will share photos of the event.

So, the first day of the new year has been quiet -- soup for lunch, doing a bit of unpacking and settling in.  All of that has been put off because of the dread, evil disease we have been messing with.  Hopefully I can get more done today and the stack of boxes can dwindle a little more.

Do you make resolutions?  I do not.  I just like to think that the thing to do is make the most of each day and what it has to offer.  Here is wishing all of you a very Happy New Year full of blessing!