I am not a cold weather person.

Back in 1985, in San Antonio, we had 15 inches of snow which completely paralyzed the city.  San Antonio didn't own snow plows.  We were stuck.  These photos came from the internet and aren't my own although I have some but they are packed away. 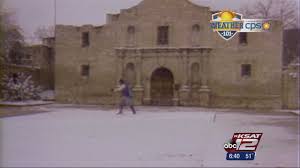 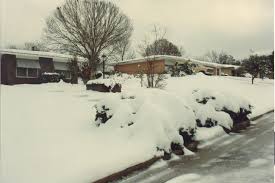 It was fun for about the first day and then it ceased being fun as I had to rescue my 65 lb. basset hound when she sank in the snow in the back yard.  We watched my elderly neighbor try to shovel snow off his flat carport roof and ended up helping him so he wouldn't have a heart attack.  Being closed up for days with bored kids wasn't fun either not to mention running out of snacks.

So, I don't look kindly on the fluffy white stuff, the below freezing temps or ice glazing over my driveway and street.  That is all I have to say about it.

I started a new book last night.  It is the second in the Cedar Cove Series by Debbie Macomber -- 204 Rosewood Lane.  I watched the mini-series on tv and enjoyed it so I thought I would delve into the book series and have read the first one.  It is pretty good, lots of characters to keep straight, some spice, some anger, some comedy.  It has held my interest and I read about a quarter of the book in a couple of hours so there you go.

Still trying to shake this bug -- my head is still messed up and still coughing but hopefully it is on its way out the door -- it has really overstayed its welcome!  I am continuing to unpack boxes -- they seem to never end -- and hopefully toward the end of the week we will be back at the old house getting more things packed up.  It is amazing how much stuff there is and how much needs to go someplace else.  Fortunately, though, after the last move, I have been careful about accumulating too much stuff and so it isn't unreasonable, we just got sidelined with all sorts of stuff going on.

So, guess it is time to get the day started.  Have a good one!