What Goes Around Comes Around -- My House

That old saying, "what goes around comes around" usually refers to your actions being revisited on you.  Today, I am using it in regards to my house.

My husband and I were married in 1972 -- the era of avocado green, harvest gold and pumpkin.  None of them my favorite colors.  However, we did use them because, like everything else, that was what was popular so that is what we could mostly get.

I came into the marriage with an Early American bedroom suite -- mine from childhood (although it wasn't childish) complete with a four poster bed, a dresser with mirror and a chest of drawers.

This bedroom furniture set the tone for future purchases and, before too long, we had  an apartment full of Early American furniture thanks to a manufacturing company known as Tell City Furniture.

Our first purchase together was a drop leaf table. 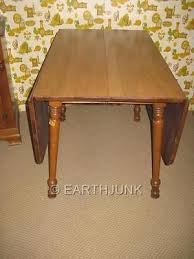 This is not my table but it is the same table.  My husband liked the table but he wasn't crazy about the fact that I set up an account, in his name, at a local furniture store and purchased this table, in his name, before he even had a job right out of college.  I think he feared that was how things were going to go.  His fear was validated.  The table now sits in my new dining room.

So, ten months after we were married we bought our first house -- a little, mid-century tract house in the neighborhood in which my husband grew up and only a few blocks from where I grew up.  A larger space required more furniture.  One of the pieces we purchased was this table for our kitchen. 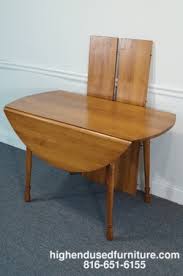 Yes, this was another Tell City piece that has served us well for many years. It is now sitting upstairs and being used as a game table.

So, as things usually go, we started a family which required us to build on to the house and yet more furniture was bought in the same style and so on it went.  We moved to Ft. Worth in 1990 and acquired a larger house which required a bit more furniture and that is when we strayed from our tried and true Early American style.

It wasn't in style anymore and  you couldn't really find much of it.  So, we did the wrought iron tables with glass tops, lazy boy recliner furniture, new bedroom furniture that was more English than Early American sort of thing -- we became eclectic.

Moving to the next house which was Country French in style and very ornate required us to buy bigger and yet a different style of furniture.  My much loved and used Early American furniture was put into storage after we after we dipped our little pink toes in the pond of sophistication!

Fast forward to now --  we have moved again to a house that is considerably less ornate.  It is bigger but plainer.  The woodwork is not massive and the lower ceilings not coffered.  It is a bigger house yet but much more conventional, straight forward and actually useful.

I needed more furniture so what did I do?

Took all my Early American furniture out of storage and am re-using it in my new house.  I asked my husband why this house seemed so familiar, so comfortable, so homey.  He just looked at me and said "because it looks a lot like our first home, our apartment". And he was right.  I have furnished it with the same stuff, I have put the same sorts of bedspreads on the beds, we now have venetian blinds and not shutters -- yes, it is like coming home again.

Apparently, what goes around DOES come around.