We pick up leaving Nashville and its rain and snow -- yes, snow.  I wasn't thrilled -- and head toward Savannah.  My daughter assured me that I would love Savannah and what can I say -- she knows me well.  Three days was not enough.

Our goal in Savannah was to visit the Juliet Gordon Low birthplace since it was Girl Scout Day the day we were there.  We joined another group and took a tour of the Low home and learned about her life and how she started the Girl Scouts of America.

I don't mind telling you it was an absolutely gorgeous home and was furnished with many of the Low personal effects.  The bathroom was over the top -- for the time.  Who doesn't want a toilet that looks like an elephant? I think the photo is on my husband's camera.  Sorry.

After spending quite a bit of time at the Low home we visited the first headquarters of the GSA which was housed in the carriage house owned by Juliet Gordon Low's father-in-law.  It was very interesting because it was a bit of a museum with examples of past uniforms (oh, how they have changed) and many marketing items like dolls.  They even had a copy of the handbook that I had, as well as my uniform.  The handbook could be contemporary but the uniform was really dated.

After leaving the GSA behind we did a bit of walking around the various squares.  Savannah is made up of sixteen squares, each named after a person significant to the history of the city.  Each square has monuments to something or somebody, benches and the most gorgeous foliage you have ever seen.  The azaleas were blooming profusely and the moss in the trees was swaying in the breeze.  It sounds ridiculous to say, but it looked like a postcard.

I was a bit hobbled with my knees and all but thanks to their lovely trolley tours I was able to see many sites and get dropped off at various places to explore and get back on the trolley to go to the next stop without excessive walking.  It was a godsend.

We decided that ice cream sounded like a lovely idea since Savannah is the home of Leopold's -- an ice cream shop that has been around for almost a hundred years.  There is always a line and this day was no different. 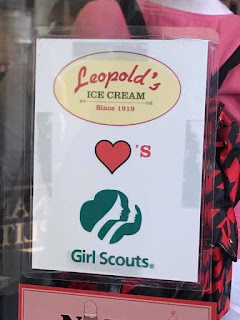 So, as the rest of the group stood in line, I decided to wait it out at one of the outdoor tables where I struck up a conversation (as I am so apt to do, much to everybody's chagrin) with a lady who was also sitting it out.  We chatted until her companions arrived and I went to leave and they told me to stay so the chatting continued.  One of her friends was named Barbara.  We talked about why we were there visiting and where we came from and we were surprised to learn we both came from San Antonio.  The conversation, of course, veered to school and who knew who and we said -- at the same time -- that we went to Edison!  Seems she graduated in 65 and I in 68.  We started naming off people we knew and yes, we knew the same people.  This is such a perfect example of what a small world it is.

More to come about Savannah, Day 2. 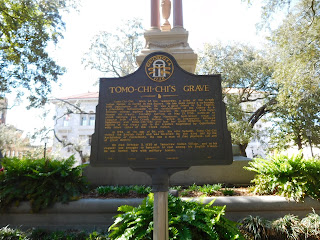 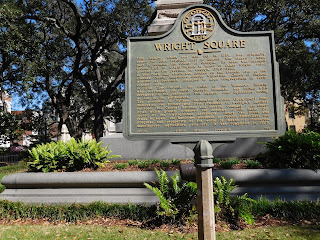 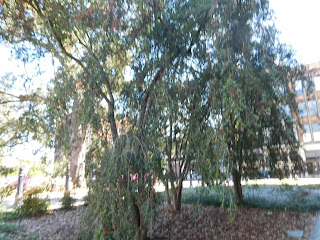 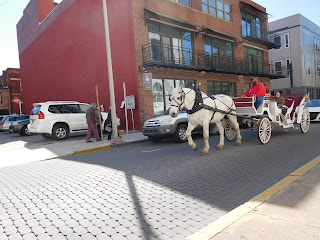 The photos above are just random offerings by the Bean.  She commandeered my camera and she wasn't very selective about what she snapped! So, I have to thank my daughter for letting me use some of her photos.