Made in Savannah Series 1-3

I think by now everybody has figured out that I was completely smitten with Savannah, Georgia.  I was.  I am not ashamed to say so.  I would love to go back.

I have watched "Midnight in the Garden of Good and Evil" so I could at least look at parts of it again.  I did some research on books set in Savannah and have read the first three books in a series called "Made in Savannah" by Hope Callaghan. 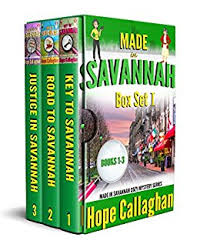 I obtained the first three books as a boxed set for my Kindle -- for $.99.  How could I lose with three books for less than a dollar. I didn't know what to expect but I was anxious to read them.

I have finished all three and have purchased #4.  These are clean, cozy mysteries about Carlita Garlucci, her husband Vinnie, a crime boss, and their four children.  As the series begins, Vinnie has died and left Carlita with more than a few things to figure out, including an envelope, a key and a deed to some property in historic downtown Savannah.

All of this leads to a new life for Carlita and her family -- one away from organized crime but chock full of mystery everywhere she turns.

These books are quick reads, not terribly complex but great fun.  I recommend them and will continue to enjoy the series.
at April 05, 2018 No comments: