We decided to extend our stay in Savannah an extra day because there is just so much to see.  An extra day could have turned into a week for me but we did need to move on since we only had a week.

The second day was full of shopping and food and looking at all the gorgeous architecture. 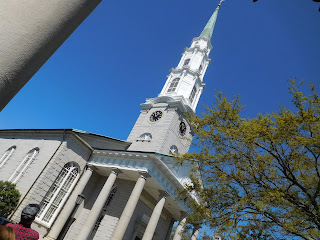 There are no tall buildings in Savannah, no skyscrapers -- I think the tallest building is four stories.  The tallest thing you will find in the city are church steeples -- this being one of the best examples. This is the Independent Presbyterian Church.  It has a rich history and you can read about it on the website at http://ipcsav.org/

Another  outstanding example of Savannah churches is the Cathedral of St. John the Baptist.

The exterior of this church is breathtaking but the inside is even more so.  You can visit their website as well at http://savannahcathedral.org/

This is just a drop in the bucket in regards to the architecture. The mansions and row houses around the squares are gorgeous and the ironwork is so beautiful.  There is a lot of iron work on the homes and the story is that the wealthier you were the more iron you had on your house so there you go. 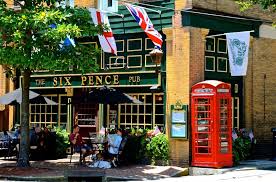 It is authenic, the food was wonderful -- I had the shepherd's pie and salad -- and if you want to see it in action it is one of the locations in "Something to Talk About" with Julia Roberts.  I would go back -- right now -- I wonder when the next flight is?

And, then, of course, you have to do a little shopping.  There were great shopping places -- one called Silver Silk and Beads had gorgeous silver pendants that were designed reminiscent of the elaborate iron work you see around the city.  Gorgeous but I decided to go to Twinkle  and buy a cute little turquoise cross body bag with matching bi-fold wallet (tiny but it works!) and pom pom key chain which I really needed -- I really did! 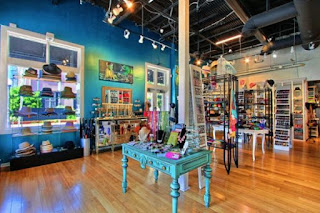 It was a wonderful day -- the weather was gorgeous -- the citizens were excited about the upcoming St. Patrick's Day festival and everybody was decorating and feeling the festive atmosphere.  Personally, though, I am glad that we were gone before St. Patrick's Day because apparently it gets really rowdy -- people actually travel to attend so it isn't a totally local 'thing'.

The first day we used the trolley and my knees were thankful -- sort of -- climbing on and off those buses wasn't easy -- but the second day we walked everywhere and decided to take a Ghost Tour that evening.

It was a grand tour that included dinner at The Pirate House -- a restaurant housed in a building that was built in 1734 making it the oldest building in Georgia.  The meal was lovely -- although a LOT of food --my meal alone could have fed all four of us -- and it was ended with  a tour of the basement -- the very haunted basement.  Do I believe in ghosts?  Yes.  Did I see or feel any?  No.  With that said, the entire atmosphere of the city seems charged with excitement.  Does that have anything to do with the paranormal activity that is supposedly strong or was it just St. Patrick's Day?  I don't know but next time I go I definitely want to go to the CVS that is built on the site of the original jail -- seems that the spirits like to turn over shelving on the customers. Sounds like fun!

The next day saw us sadly heading out of Savannah toward Birmingham Alabama.  While there we visited the  16th Street Baptist Church which was the site of the 1963 bombing that killed four little girls.  We learned that two of these girls were Girl Scouts which made it even sadder -- these girls were apparently strong examples of what we all want our daughters to be -- smart, leaders, caring -- what a shame.  The whole area was sad -- the park across the street that was dedicated to these girls with statues and plaques was just so sad. I remember the events at that church but it seems much more recent than 1963.

Leaving there we headed to our hotel where we discovered that we were just too tired to go eat.  So, the Hubs and the Daughter walked across the street to a Publix and bought the makins for a picnic in our hotel room.  It was a great change from restaurant food -- even as lovely as it had been.

Finally, the morning found us rising and shining and heading out for the 12 hour drive back to Fort Worth.  It was a long, hard drive (it rained the entire way across Mississippi) and I was so glad to see a Whataburger!  Exhaustion set in, and we were glad to see our own bed.  It took me about three days to recover.

Would I do it again?  You bet -- with some changes -- I would choose to go to Savannah -- on an airplane -- and stay in downtown where I could walk to everything.  But yes -- and I probably will!

What Does One Do When Restless? Art!

Last night I was restless. I think I was tired and my knees were hurting and I wanted to do something but not too much of something.  All my sewing was upstairs and I just couldn't be bothered to climb the stairs so....

I decided to draw.  Now, you must understand that while my father was a very good artist and made a living at it, I didn't inherit the gene.  I knew this so I never even tried.  However, as many people do as they age, I have a new appreciation of art and enjoy a number of aspects of it.

Obviously fine art, painting, sculpture, etc is all art but I look at quilting, cross stitch, and paper crafts (i.e. cardmaking) as art as well.  I love the complexity of mixed media projects and have worked on a couple of those as well.  I was right on board with the new adult color book craze and love it -- I am going to indulge myself in a full set of prismacolor pencils as soon as I can find a full set someplace!

But, what I would really like to do is be able to draw.  I used to marvel at my father's ability to just sit and draw effortlessly.  The detail in his work was amazing (he was a cartoonist) and I would just shake my head not really knowing how he did it and being a bit resentful that I couldn't.

I will never be an artist but I have discovered that is ok.  Art is in the eye of the beholder and while I will never have the talent that my father did I can still play with it.

So, last night that is what I did.  I opened the internet and searched for sketching ideas and found a couple of things and gave it a go.  I was surprised to find that it was actually relaxing and not stressful because, after all, art is in the eye of the beholder, right?