October is my favorite month.  However, somehow I missed it this year.  We were still having summer in October so I was indoors a lot.  It finally felt like fall fell on Halloween.  It got chilly.

It is now November 11 and we are in winter.  We have been near our first freeze.  The weather man was saying something silly like "stray flurries" on Monday.  So, it appears we have had about 10 days of fall.   Bother.

So, between the time change and the weather, I have been a bit out of sorts.  Allergies kicking up, joints aching, just sort of blah.  I haven't been getting much of anything done but I have been playing with card making.

Here are a few of my recent efforts.  I was trying to design a card for a small boy who is at St. Jude's for about six weeks receiving radiation for a tumor.  It is a difficult thing to think about making for a child -- get well cards can be so -- depressing.  So, I decided not to make a get well card -- I did something different.

Tell me what you think. 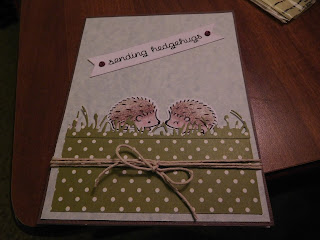 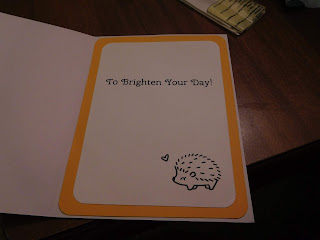 Then I didn't know if it was too bland and not colorful enough so I made this one. 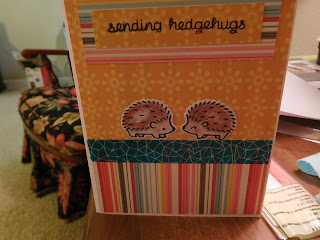 And then I saw an anniversary card similar to this one and I made it just to compare. 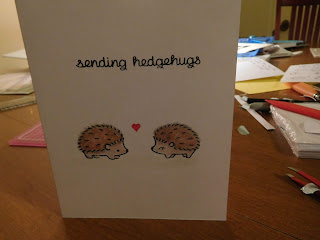 I love the stamp set and it is easy and fun which I thought "fun" was exactly what the little boy needs.

So, I am probably going to send the first one.  I am thinking that I am going to send one once a week until he is home so I need to come up with some more ideas.  I have some cute digi stamps that I love to color so that may be my next project.

I will share whatever I do -- card making
is very therapeutic and a bit humbling.  I have two new "toys", if you will, a stamp positioner and an envelope maker.  Well, yesterday after hours of sitting and coloring and cutting and gluing I decided to play with my new toys.  I couldn't get either of them to work and was so disgusted.  I was tired and tired of sitting so I just closed everything up and left the room.  After a few videos on you tube and a couple of embarrassing "ohhhhhh" moments I realized that the toys were not at fault but rather operator error.  See what I mean about humbling.

So, today is a new day and I will approach this activity with new knowledge.  I have some ideas!  I will share later.