The Bean and Me Book Club has completed reading the first book in our queue.

The book is "The Cricket in Times Square" by George Seldon.  It is a Newberry Award winner and boasts illustrations by Garth Williams.

This is the story of Chester, a cricket who traveled from Connecticut to New York City.  He became the pet of Mario Bellini and the fast friend of Harry Cat and Tucker Mouse.  They had a great time together, a few mishaps and an awesome discovery -- Chester was musical.

He was promoted and performed in the newsstand owned by the Bellini family.  He had an article written in the newspaper and people would come from far and wide to hear him "sing".

But, the more famous he became the more unhappy he became.  He missed his simple life in the Connecticut countryside.

Then one day, he decided to retire and return to his home.  And, he did.

This is a great book with a great moral.  The animals were so engaging and the Bellini's were so typical.  I recommend for all ages. 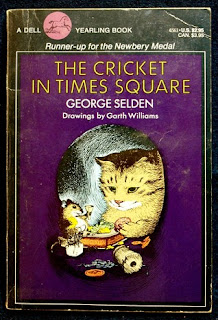 Next up -- "Because of Winn Dixie". Stay tuned.