I received a request to show my “hot mess”.  Well, here it is. 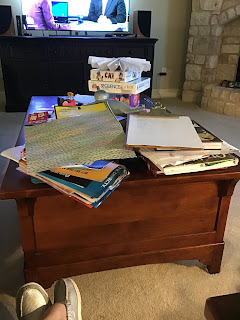 This doesn’t look like the well planned clutter of the Gilmore Girls.  Granted four grandkids left stuff out but that maddening stack on the end of the table belongs to the Mister and he likes it there.
at July 11, 2019 2 comments:

For some reason I am still interested in homekeeping.  I read lots of blogs and magazines and I have even explored Marie Kondo’s method of tidying up.  The thing that really has my attention, however, is television programs and set designs.

I recently watched the entire series of Gilmore Girls and was totally fascinated with the Gilmore house.  Nothing matches, it defines shabby chic and is so welcoming and doesn’t look the least bit cluttered even though it is.

Now I am watching Parenthood.  I have loved the Braverman house since I watched it originally.  Again, it almost looks like the clutter was purposely designed that way.  I guess it was.  Again, it looks warm and homey and inviting.

I have tried to aspire to the minimalist agenda but I know my pack rat husband just can’t do that.  It would take about five seconds for him to clutter up a minimal coffee table because he is very dysfunctional with flat surfaces — he likes to see them covered in stuff.  I hate it but I have never been able to change him.  At this point in my life that struggle is over.

So I have been trying to create a warm, eclectic living environment that is welcoming and comfortable. What do I call it, this style?