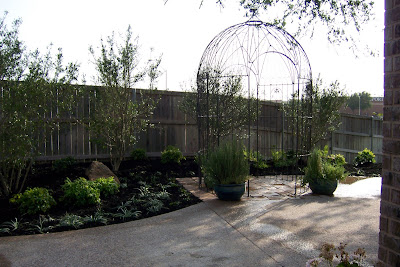 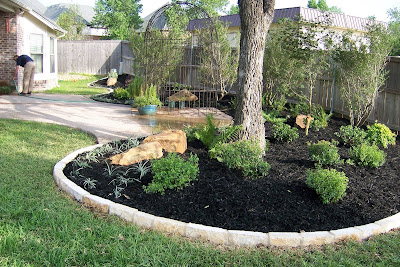 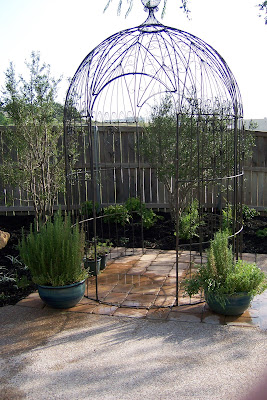 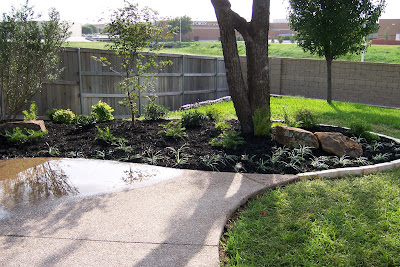 Here is our completed landscaping project. Our thanks to Jathan of Glennscape for hauling large trees, dealing with rain and constant changes from us.
at August 08, 2009 4 comments:

Email ThisBlogThis!Share to TwitterShare to FacebookShare to Pinterest
Fairy Doors --

This is coming to my house soon! I can't wait. I have a perfect place in the new flower bed for it and it is going to be very cute!

It is from www.miniature-gardens.com. I have been doing some looking at fairy gardens on the internet and, while I don't think I am up for creating an entire village, I have always wanted a door (introduced to me by my Aunt Velma). So, this one has been ordered and will be here eventually -- hopefully in time for fall because we don't want the pixies to get cold!
at August 08, 2009 2 comments:

Email ThisBlogThis!Share to TwitterShare to FacebookShare to Pinterest
Was it Me or my Grandmother?

I am aging. I know this from the obvious signs -- greying hair, wrinkles, an approaching milestone birthday, suddenly sort of liking the color purple which I always, ALWAYS assigned to "old ladies". I did not, however, think I had an old attitude. If I don't look in the mirror, I feel 19. I still remember the words to the songs of my youth, I have a get up and go approach to life and I keep up with the here and now. So, I was shocked last evening when I saw what I saw and when I thought what I thought and suddenly my age closed in on me and I felt old.

AW and I were feasting on soup at one of our usual haunts and, being seated close to the door, we got a good look at all the patrons as they entered the eatery. As I was sipping my soup I glanced to the side and saw some black flats with rather wide grosgrain ribbon attached at the back and lacing around the wearers ankle to be tied in a large black bow. This wasn't a child's foot so I had to look up to see what was north of these outrageous bows. What I saw was a 40-something woman dressed in -- her slip! It was a pink number that was either faded or tie dyed -- not sure which. Under this little number she wore black undergarments and tied around her waist was a floral, floaty apron-like affair that tied in the back (with a large bow, I might add) and came to an assymetrical point to one side of the front. It only covered the front of this get-up, not covering her entire body so from the back she was dressed -- in her slip.

I was shocked. Of course, I had read about women wearing lingerie as outerwear, mostly in the evening and mostly black or white. I never thought I would see someone parading around at the usual dinner time in a family restaurant dressed in this manner. I was disgusted. This woman looked intelligent, carried a status bag and had a trendy hairstyle. I am certain she had something in her closet to wear that would have been more appropriate.

Then I thought about my reaction --- it was certainly not one of hippness, trendiness, or acceptance. It was an old woman's response -- I could see Grandmother Madge sitting there passing judgment on this woman and I realize then that my age was showing and I was equally appalled by THAT.

So, in the world of fashion I would have to say "to each his own" but I would be remiss if I didn't say it was the most laughable thing I had seen in a long time and an enlightening moment to myself -- fight the aging a little harder because it is creeping up faster that I realize.
at August 08, 2009 No comments: