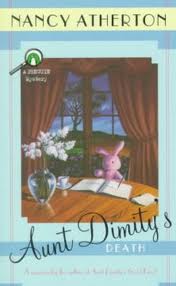 A while back, while browsing the sale table at B&N, I noticed a rather small book with an interesting cover.  The title was "Aunt Dimity:  Snowbound".  Since I am notoriously bad for choosing books for their covers, I didn't even realize that this book fell somewhere in the middle of a rather lengthy series.  Of course, the book was entirely readable with enough back information to not leave you lost but all it made me do was want to read the whole series starting with the first episode.

I searched for the series on B&N but it wasn't there so I went to my next go-to place -- ebay!  I found a bundle of various titles in the series, including the first one and the one that I had bought for my nook.   I got a good deal, five books in the series for $9.95 so I went for it.

The day they arrived I opened the first book in the series "Aunt Dimity's Death".  Sounds a bit grisly, doesn't it?  Well, it isn't in the least but a very charming intro into what I hope will be an enjoyable investment of my time.

The first book opens with the lead character, Lori Shepard in deplorable straights.  Divorced, broke, virtually homeless and grieving for her newly deceased mother -- what a state.  She received a letter from what is described as a "Dickensian" solicitor and the adventure begins.  I can't say much more because it would a huge spoiler but over the course of the book, Lori finds out the truth about her mother and  Aunt Dimity, she finds a home and a love, solves a great mystery and ends up very happy.

Both of these books have been fast, light reads.  They are sort of modern day Nancy Drew with a bit of romance thrown in.   Oh, and a little bit of ghost story as well.    A little something for everybody.  So, if you are looking for a read that is a total escape this would be a good choice.  A cup of tea , a cozy throw and a rainy night would make the perfect environment for these books.  I recommend -- enjoy!
at June 06, 2011 No comments:


The question of the day is "where do you do your reading?"  Well, I have pretty much always read anywhere I am because I tend to carry a book with me all the time -- comes in handy while waiting for the Hubs to browse the camera store, the woodworking store, the DIY store -- you get the picture. I used to read a lot in the car while waiting for kids to get out of school but that isn't applicable anymore. I have to say, though, that the place I read most is in my family room, in my favorite chair.  I can't read in bed anymore for some reason but almost any place else is fair game.
at June 06, 2011 6 comments: