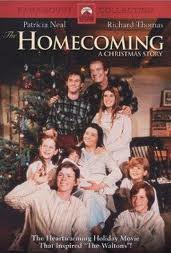 First Movie of the Christmas Season

After a perfectly wonderful Thanksgiving meal with family, after everybody departed for their own homes, after the dishes were loaded in the dishwasher and the remains of the meal properly put away, the Hubs and  sat down to enjoy the first movie of the holiday season.  I had originally decided to watch my favorite, all-time movie "The Bell's of St. Mary's" with the iconic Bing Crosby but, as we scrolled through the guide on the TV I discovered "The Homecoming: A Christmas Story".  I own the DVD but we decided to DVR it and watch it later.   However, when "later" got here I was so sleepy I only got halfway through it and had to retire.  So.....like any dedicated Christmas  movie watchers would do -- we finished it this morning!

This was a made for TV movie and was, I suppose, the pilot for the series "The Waltons".  Most of the cast was the same as the TV show, save the character Olivia Walton who was portrayed by the great actress Patricia Neal.  John Walton was played by Andrew Duggan and Grandpa was played by Edgar Bergen.

I enjoyed this movie much more than "Spencer's Mountain" which was also based on the life of Earl Hamner, Jr.  It was set in the same time period as the TV series and I have always been a big fan of Richard Thomas so I thought it more realistic.

So, that is the start of my Christmas movie watching.  I don't know what will be next -- stay tuned to find out!

As far as today is going - I am stitching! All day! Leftover for dinner, Hubs is putting up the Christmas village and I am just allowing myself to sit and enjoy a hobby that I usually do in snatches.  This is the project -- and I am zipping right along with it and having a wonderful time! 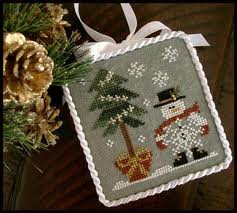