I Can't Believe I Like Dressing Out of Cabelas

Yes, it is true.  Somehow I have morphed from the cute little teenager wearing Bobbi Brooks from Joske's and Wolf & Marx into an old broad buying her duds from Cabelas.   Ok, granted, I have only bought one blouse and a bag but still -- it is a sporting goods store and I am not the sporting type!

So, yesterday we went in there to look for something for the Hubs.  I am not going to tell you what because it sounds crazy.  Ok, I will tell you, then I won't be the only crazy one around.  He wants to buy a camo pop up deer blind to sit in and take photos of the birds in the backyard.  Now, I am all about him taking pics of the birds and I don't really mind the blind -- especially the one that pops up and down like a play pen.  I would think, however, that the birds would be more cooperative and pose for the person who fills the feeder endlessly and even goes out of his way to research what sort of birds are out there and who prefers what foods.  I digress.

So, we went in looking for this piece of equipment and truthfully, I am only going to stand there for so long looking at something that really doesn't interest me so much before I drift away.  Well, Cabelas makes sure there is something for everybody there so I wind my way to the clothing section and I start looking at purses.  I have been wanting a cross body bag that is big enough for what I carry.  I had a cute little Coach one but the Giant Sunglasses just didn't fit -- honestly, neither did anything else.  I love Vera Bradley but I was looking at something that would go with more clothing so I ran across this 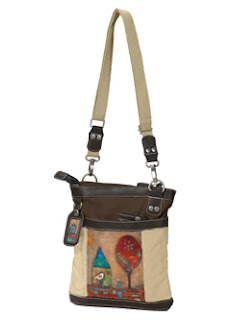 I sort of liked it immediately but I wasn't going to drop $60 on it without some thought.  Yes, I know, I have mindlessly spent more than that without so much as a blink of one eyelash but I am in the process of mending my evil spending ways.  So, I went home and did research.  I liked what I read, the measurements seemed reasonable but I had to try it on -- a concept that I learned from DD.

By this morning, I had decided that I would like to take another look so back to Cabelas we went which was ok with the Hubs because he wanted to take another look at the deer blind.  So, I grabbed up one of the two purses they had and proceeded to the help desk where I told the girl I had to "try it on" and she looked at me as if I had lost my mind.  After I decided that it was comfortable enough on my poor gimpy shoulders and worn crossbody as well, I commenced to taking everything out of the purse I brought in and seeing how it fit in the new one.  Ok, in order to get the Giant Sunglasses in, I had to buy a smaller case but that was ok, I was in need anyway.  Everything went in well, it has zippers enclosing everything but a back pocket which is good for those of us who either tend to drop purses or leave them gapping open.

I bought it with Christmas money that I hadn't spent yet.  I came home, loaded it up and promptly went to the grocery store.  I wore it cross body and it was wonderful.  The way the strap is arranged, it creates no swing.  It stayed close and I was hands free to shop! Nothing was dragging on my poor, arthritic shoulders and I felt liberated.  And....drumroll, please....it was on sale!

If you are interested in looking at the manufacturers website, it is a Sherpani and the style is Luna.  They have several styles and four or five different art work designs.  I have a feeling I am going to wear this one out.

So, even though I broke my no-spend streak, at least it was on sale and it seems like it is going to work for me! Yay!
at January 14, 2012 2 comments:

Email ThisBlogThis!Share to TwitterShare to FacebookShare to Pinterest
Labels: Cabelas, Sherpani
View from a Window --

Ok, the pics were taken late Thursday afternoon but I am just getting them posted.  Anyway, they don't look much different than the previous ones. 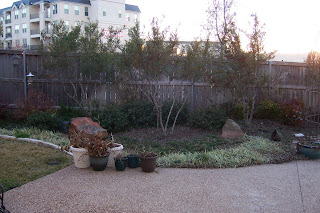 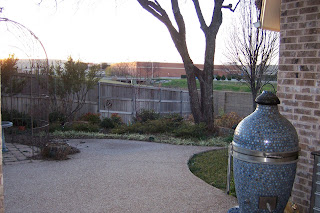 Remarkably unchanged, right?  So, I will add a couple of pics of birds that the Hubs took.  He has the camera mounted onto the telescope and is actually taking some good bird photos. 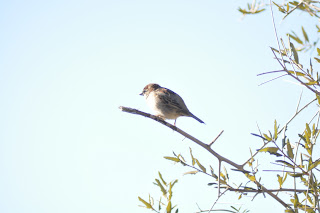 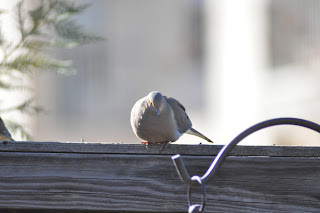 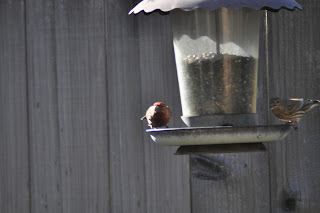 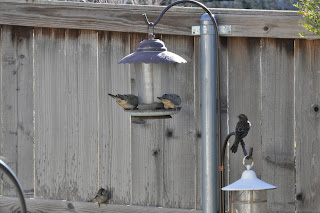 Looks really serene, doesn't it?  Yeah, not so much.  We have so many doves out there it looks like something out of Alfred Hitchcock's "The Birds" and we have a hawk that relieved us of one of our doves -- there is nothing but a mess of feathers all over the flower bed.  Hubs is enjoying feeding the birds even though they are becoming demanding little demons and can put away an entire feeder of seed in one day -- but I have to wonder if we are just setting them up to be somebody else's dinner?  Hubs says it is just nature -- I say it is creepy.  In any event,  this is the life in our backyard!
at January 14, 2012 2 comments:

Email ThisBlogThis!Share to TwitterShare to FacebookShare to Pinterest
Labels: A View From A Window
Newer Posts Older Posts Home
Subscribe to: Posts (Atom)