Booking Through Thursday -- Do you have siblings?  Do they read?

No, I don't have siblings but I have a cousin who is a prolific reader and reviewer.   As a preschooler, I had an avid interest in reading and would watch my mother read the newspaper and ask her what it felt like to be able to do that.  I knew from an early age that reading was a very important and desirable skill to have.  My cousin, who is four years older than me, lived across the street so we were together a lot and one of the things we did the most was play school and I credit her with teaching me to read and fostering an interest in books that I still possess to this day.
at May 03, 2012 No comments: 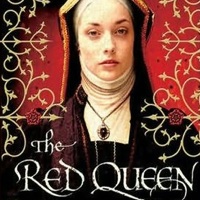 The Red Queen by Philippa Gregory


The latest addition to my 2012 Reading Challenge List is The Red Queen by Philippa Gregory.  I received this book as a birthday gift from my daughter, son-in-law, and granddaughter.  It is the account of Margaret Beaufort, the grandmother to King Henry VIII, and her involvement in the war between the York's and the Tudor's for the right to rule England.  Margaret endured a particularly difficult childhood, being married off by her mother at age 12 for the purpose of producing a male heir to the throne.  When she almost lost her life and that of her child during a difficult labor, her mother told the midwives to save the child.  They both survived but spent their lives apart yet scheming and planning to regain their rightful place on the throne.  Gregory describes this book as part history,  part speculation and part fiction but after doing a little research, I think she did a good job in the history area.  The speculation arena is pretty much universal and the fiction was well written and readable, one thing that I think Gregory does exceptionally well.

This book does a really good job of depicting the role of women in 15th century England and you wouldn't want to be there -- really.  It was a particularly brutal time and women had to endure a lot of things from their children being taken from them, being widowed at an early age -- sometimes before the age of 20, being assigned to husbands or guardians, and living in the knowledge that their primary purpose is bearing children regardless of the circumstances.

This book is well written, readable, and accurate and I would recommend it to anyone interested in British history.
at May 03, 2012 No comments: